Cisco leads in both Video Infrastructure Software and Hardware 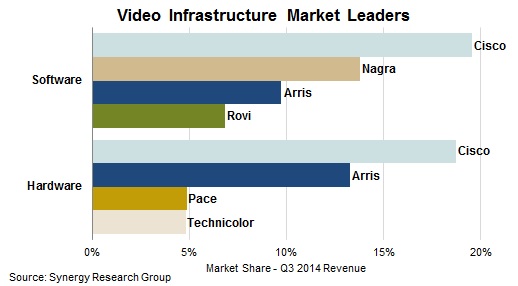 RENO, NV — New Q3 data from Synergy Research Group shows that Cisco maintains a strong market lead in both video infrastructure software and hardware, with its worldwide share of revenues approaching 20% in both segments. A different group of vendors compete in the two segments, but Arris comes the closest to competing with Cisco across the board, being ranked second in hardware revenues and third in software. Arris has also been gaining market share at Cisco’s expense. Nagra and Rovi round out the list of top software vendors, while Pace and Technicolor are ranked third and fourth in hardware revenues.vi hw sw q314 Quarterly revenues for video infrastructure hardware & software grew by 8% year on year to reach well over $10 billion, with hardware revenues growing marginally more rapidly than software revenues. While the boundary between hardware and software is often a blurry one, revenues from hardware remain several times larger than software revenues.

“Clearly Cisco and Arris both benefit by having a broad portfolio of video infrastructure products and solutions, but there remains plenty of room in the market for more focused vendors and niche players,” said John Dinsdale, a Chief Analyst and Research Director at Synergy Research Group. “Within the market some segments are growing extremely rapidly and some new technologies are causing disruptions, so I expect to see plenty of opportunity for smaller vendors to make their mark. Over the last four quarters the highest-growth segments have been CCAP, cloud DVR software, TV everywhere software, streaming media devices and search & recommendation software.”