Amazon Fires to the Top of the US Digital Media Streamer Market, says Strategy Analytics

BOSTON — Despite only launching its Fire TV streaming box and stick in 2013, Amazon has quickly established itself at the top of the rankings in the US Digital Media Streamer market taking a 30% share of shipments in Q1 2015. According to Strategy Analytics’ Connected Home Devices (CHD) report “USA Connected TV Device Vendor Share: Q1 2015”, the top four brands account for over 90% of the standalone digital media streamer market. 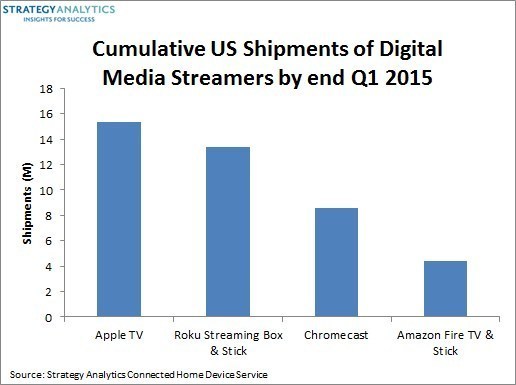 David Watkins, Service Director, Connected Home Devices, said, “Low-cost standalone digital media streamers are proving hugely popular with consumers who want a quick and easy way of accessing their favorite online streaming services on the living room TV and the entry of instantly recognisable brands such as Google and Amazon is helping maintain growth in the sector” He added, “Amazon has rapidly established itself as a force to be reckoned with in the living room as it embarks on its mission of bringing its content and retail services to all screens including mobile, PC and TV. Meanwhile, Apple has slipped behind its rivals having not made a substantial update to its Apple TV hardware for the better part of 3 years and we suspect that the short-term exclusive deal to include HBO Now and reduced price of the box will not be enough to pull it back up the rankings in the immediate future”.