MONTEREY, CA — According to the most recent report from SNL Kagan, the inconclusive movement in U.S. multichannel subscriptions took a more decisive direction in the second quarter, producing the largest loss to date amid growing fears of cord cutting. 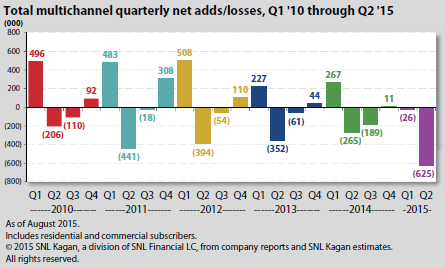 SNL Kagan estimates the U.S. cable, DBS and telco platforms collectively shed more than 600,000 video subscribers in the three months ended June 30, falling to 100.4 million combined residential and commercial subs at mid-year. The slide, which follows an uncharacteristically weak first quarter, points toward the likelihood of a much larger decline for full-year 2015 than the industry produced between 2010 and 2014, during what could essentially be seen as a period of general malaise.

The second-quarter crater was the product of a dramatic softening in the telco video sector, combined with an accelerated drop in DBS subscribers along with cable’s persistent decline. While cable sub losses slowed, they remain by far the greatest source of downward pressure on multichannel subscriptions. Speculation swirls around the decline in DISH Network subscribers coinciding with the promotion of the provider’s alternative Sling TV OTT offering, but the estimated loss from DISH was compounded by a decline at DIRECTV to drive the satellite total lower.