AT&T to use DIRECTV Genie as common video platform

DALLAS — AT&T Inc. (NYSE:T) today provided an update on its strategy and financial outlook, including expectations that revenues, adjusted earnings and free cash flow will grow in 2015 and each of the next three years. This growth will reflect AT&T’s unmatched position as an integrated communications and entertainment company following its recent acquisitions of DIRECTV and Mexican wireless properties Iusacell and Nextel Mexico.

AT&T’s DIRECTV and Mexico acquisitions significantly diversify the company’s revenue mix, products, geographies and customer bases. As previously reported, AT&T expects that, by the end of 2015, its largest revenue streams will be, in descending order: Mobility and Business Solutions (both wireless and wireline); Entertainment & Internet; Consumer Mobility; and International Mobility and Video. The company plans to begin providing detailed reporting on these segments beginning with the third quarter.

AT&T continues to expect $2.5 billion or better annual run-rate cost synergies from the DIRECTV transaction by 2018. This does not include numerous revenue synergy opportunities, including cross-selling additional products to each customer base; enhanced retail distribution as AT&T begins to offer DIRECTV in its 2,200 company-owned retail store locations; and enhanced advertising opportunities, such as local ad insertion. The cross-selling is a 39 million total household opportunity – with 15 million adding wireless, 21 million adding video, and 3 million adding high speed Internet. Additionally, AT&T now has the ability to broadly offer TV service to its 57 million broadband customer locations; previously, the company could offer U-verse TV and broadband to only about half of these customer locations.

Additional potential capital spending and working capital synergies include moving to a common video platform, as well as transitioning to a common set-top box with the Genie platform. 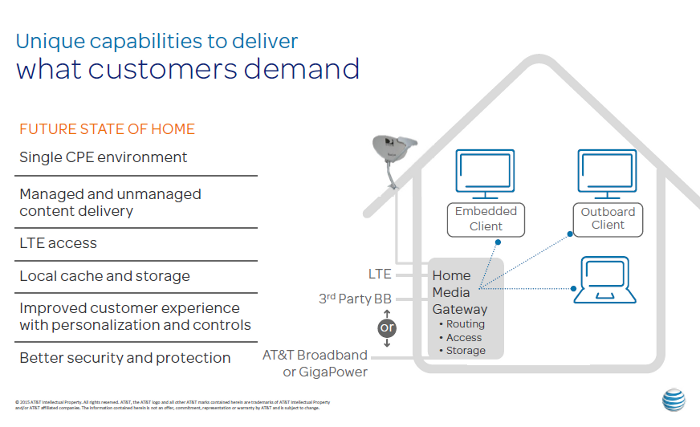 * Includes DIRECTV Latin America pay TV subscribers as of June 30, 2015, including subscribers of Sky Mexico, in which DIRECTV holds a minority stake.