Internet-protocol television (IPTV) operators posted minimal positive subscriber growth of less-than 1 percent in Q2 2015, compared to 4 percent in Q2 2013 and 3 percent in Q2 last year. Satellite operators and cable company subscriptions, however, declined less than 1 percent year over year. “Until the fourth quarter of 2014, IPTV had been the only pay TV category to experience growth; however, by Q2 of this year, IPTV’s significant forward momentum had been lost,” said Erik Brannon, principal analyst of television media for IHS Technology.

Cable operators showed a very slight improvement in Q2 2015 over Q2 2014, as the effective bundling of faster-than-IPTV broadband and video gave cable TV companies a small local advantage over IPTV. “In much the same way that cable companies had to make room for satellite and IPTV operators, the maturity of IPTV is a signal that U.S. pay TV companies must now strike a balance with over-the-top TV offerings,” Brannon said. 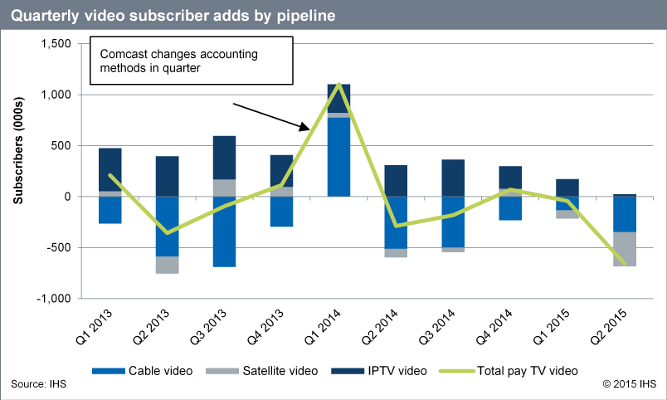 According to the latest IHS State of the US Pay TV Operator Market report, both of the satellite operators in the United States lost significant numbers of video subscribers in Q2 2015. Although Dish attempted to mask losses by including Sling TV subscribers, IHS estimates that the company lost 285,000 total subscribers, while DirecTV lost 133,000, without NFL Sunday Ticket promotions to fall back on.

AT&T U-verse TV experienced its first quarterly loss in Q2, and the company now claims to be focused mainly on high-value subscribers. “AT&T competes with the larger cable operators that are becoming more savvy,” Brannon said. “However the company is less effective against both Comcast and Time-Warner Cable, because U-Verse cannot match the broadband speeds offered by those companies, its service is no longer new in the pay TV market and its prices are very similar to incumbent cable subscriptions.”