One-third of US households will have 4K TVs in 2019

One-Third of US Households Will Have 4K TVs in 2019, IHS Says 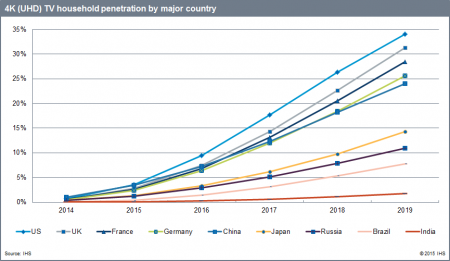 According to the latest information from the IHS TV Sets Intelligence Service, 4K TV household penetration in the European Union is expected to reach 25 percent in 2019. Growing availability of UHD content from Internet and pay-TV providers will support this trend. Switzerland is expected to reach 32 percent penetration in 2019, followed closely by the United Kingdom at 31 percent.

While Japan is a developed premium TV market, only 14 percent of all households are expected to have a 4K TV in 2019, because most households already have relatively new TVs. Domestic TV demand swelled to more than twice its normal level between 2009 and 2011, when the Japanese government ran an eco-points subsidy program for energy-efficient products and there was a nationwide analog TV switch-off.

“With the Japanese consumer preference for smaller TV screens, it will be more difficult for 4K TV to expand its household penetration in the country, even though UHD broadcasts are set to begin in 2018, in the run up to the Tokyo Olympic Games in 2020,” said Hisakazu Torii, senior director of consumer device research for IHS Technology.

Unlike Japan consumer adoption of 4K TVs in China is expected to be relatively high, with household penetration reaching 24 percent in 2019. In other emerging countries, where many households either have smaller LCD TVs or CRT TVs, 4K penetration will be lower: 11 percent in Russia, 8 percent in Brazil and 2 percent in India.