Online video streaming is growing rapidly in Sweden and a new all-time high in viewing was recorded for the fourth quarter of 2015. On average, Swedes watched 36 minutes per day of streamed online video during the period. Above all, the increase in viewing is driven by a strong growth for American services such as Netflix and YouTube. 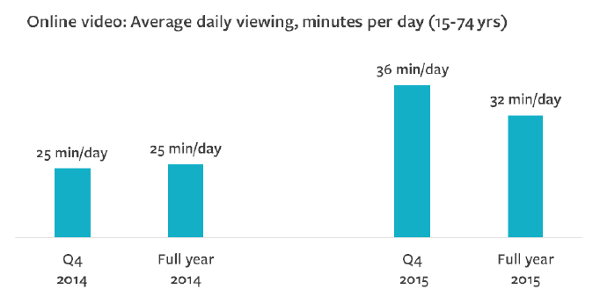 Nearly 40 per cent in the age group between 15 to 74 years watched online video on an average day during the fourth quarter, which represents close to three million Swedes. This is an increase in daily reach of 20 per cent compared to the same period in 2014. The increase in viewing is not only seen in the number of daily viewers, but also in the time of viewing, which increased even faster. Compared to the fourth quarter of 2014, total viewing time was up by 47 per cent.

In summarizing 2015, Mediavision can conclude that the viewer transition from broadcast TV to online has been significant. For all age groups, double digit annual growth rates in both reach and viewing was recorded. In absolute terms, however, it was still among younger demographics that the greatest growth was displayed. People aged 15 to 34 years on average watched nearly a full hour per day of online video during the last quarter of 2015.

Mainly, Netflix and Youtube are attracting viewers. Together they commanded more than a 50 per cent share of total online viewing. In fact, Netflix and Youtube stand strong in daily viewing time also in comparison with most Swedish broadcast TV channels. Only public service channel SVT1 and commercial channel TV4 has a higher daily viewing time in the age group 15 to 74 years.

“Streamed video services can no longer be seen as a marginal phenomenon for young consumers. We have passed a new breakpoint where we see a rapid growth for online video throughout the line. Consistently, ad investments are reflecting this shift, with advertisers redistributing their budgets to online”, says Marie Nilsson, CEO at Mediavision.