EUTELSAT 9B satellite soars into space

PARIS, BAIKONUR — The EUTELSAT 9B satellite of Eutelsat Communications (NYSE Euronext Paris: ETL) was successfully launched into geosynchronous transfer orbit today by ILS using a Proton rocket that lift off from the Baikonur Cosmodrome at 04.20 (22.20 GMT, 23.20 CET on January 29). 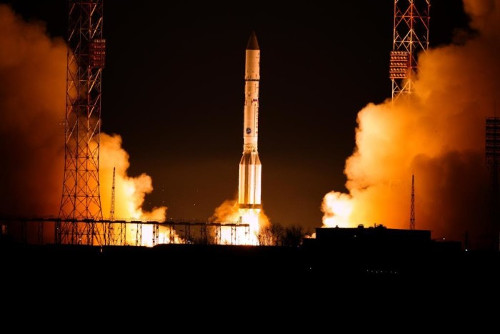 Separation of Eutelsat’s new satellite occurred after a 9 hour 12 minute Proton flight. Partial deployment of the satellite’s solar panels, that represents the first critical post-launch operation, took place two hours later. Following further manoeuvres and in-orbit tests, EUTELSAT 9B will be positioned at 9 degrees East in March to assume broadcasting of over 350 TV channels currently served at this position by EUTELSAT 9A and provide expansion capacity for new services.

EUTELSAT 9B also marks an industry first as the host satellite for the inaugural data relay payload for the European Data Relay System (EDRS) being implemented through a Public Private Partnership (PPP) between ESA and Airbus Defence and Space.

Commenting on the launch, Michel de Rosen, Eutelsat Chairman and CEO, said: “Our congratulations to ILS and Krunichev for a flawless launch that sees a new Eutelsat satellite propelled on its way to geostationary orbit. This sophisticated satellite programme reflects outstanding collaboration between Eutelsat, ESA, Airbus Defence and Space, ILS and Krunichev. We look forward to putting EUTELSAT 9B to work for the benefit of our broadcaster clients and to the inauguration of the ground-breaking European Data Relay System that is a powerful illustration of the complementarity of geostationary and low earth satellites for fast transmission of data flows back to earth.”