49 million U.S. homes have a TV connected to the internet

49 Million U.S. Internet Homes Now Own a Connected TV or Attached Content Device, According to The NPD Group

PORT WASHINGTON, NY — More than half (52%) of all U.S. Internet homes have at least one TV connected to the Internet, representing an increase of six million homes over the past year, according to The NPD Group Connected Intelligence Connected Home Entertainment Report. 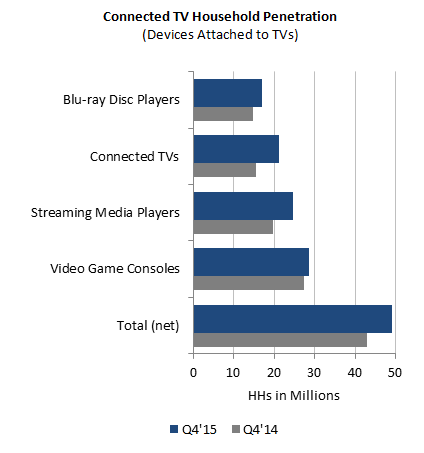 While the types of devices being used to connect these televisions to the Internet are varied (video game consoles, streaming media players, Blu-ray disc players, and the TVs themselves), the average connected TV home had nearly three (2.9) devices installed that they could use for programming from apps on their televisions.

“Ownership of connected televisions and streaming media players is accelerating while the availability of streaming content is simultaneously expanding. These combined forces will continue to drive increased adoption of connected devices within U.S. households,” stated John Buffone, executive director, Connected Intelligence. “At the same time, as the number of households that have access to apps on TVs rises, so too do the business opportunities for content owners and distributors.”