EUTELSAT 117 West B placed into orbit

CAPE CANAVERAL, PARIS — Eutelsat Communications (NYSE Euronext Paris: ETL) confirms today’s successful launch of its EUTELSAT 117 West B satellite. The satellite was ferried into space by a Falcon 9 rocket that took off from SpaceX’s Space Launch Complex 40 in Cape Canaveral at 10.29 ET (14.29 UTC) and parked EUTELSAT 117 West B in a supersynchronous orbit after a 30-minute flight. The first telemetry from the new satellite has been confirmed and processed at Boeing’s Mission Control Centre in El Segundo, California. 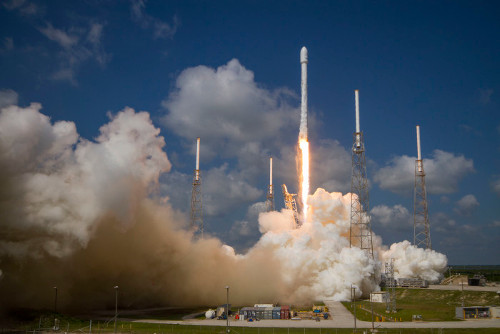 EUTELSAT 117 West B’s electric propulsion system will now be prepared for orbit-raising that is scheduled to start on 18 June and last for approximately seven months. The satellite will then undergo in-orbit tests prior to commercial entry into service at 117° West in Q1 2017.

EUTELSAT 117 West B also features a payload for Raytheon to enable the U.S. Federal Aviation Administration (FAA) to increase GPS signal accuracy from 10 metres to 1-2 metres, thereby enhancing aviation safety for users in Canada, Mexico, Puerto Rico and the continental United States including Alaska. The WAAS (Wide Area Augmentation System) payload on EUTELSAT 117 West B is the first to be included on an all-electric satellite.