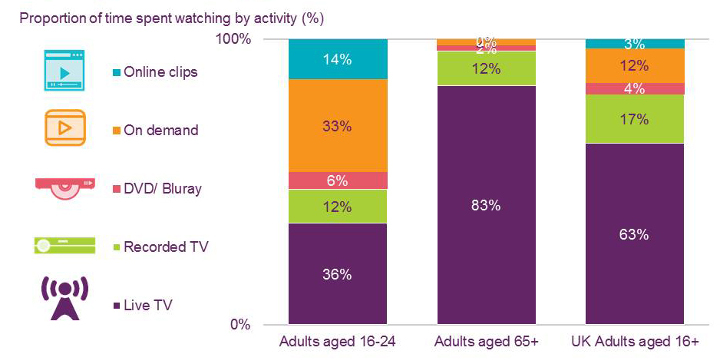 Since completion of digital switchover (DSO) in October 2012, digital is now the only form of broadcast signal available in the UK.

According to BARB’s Establishment Survey, the proportion of all UK homes that owned a TV set able to receive broadcast television was 95.4% in the final quarter of 2015. The remaining 4.6%, homes without a TV set, either choose to watch audio-visual content using an internet connection only, or do not use a television, or the television does not receive a broadcast signal.

Homes that only have digital terrestrial TV make up the largest proportion of all homes. The proportion with pay-digital satellite has plateaued, particularly since 2011, after peak take-up in 2010. And there has been only incremental growth in digital cable take-up in recent years, while free-to-view satellite services such as Freesat have grown slowly, and account for the smallest proportion of all homes. The Freeview service has been available through a number of providers since 2012. In Q4 2015, 6.1% of homes had any one of BT TV/ TalkTalk/YouView only (without satellite, cable or other platforms), shown below as IPTV digital terrestrial. At the end of 2015, PlusNet launched YouView as part of its offering although take-up data will only be available from Q1 2016.

In addition to the platform take-up highlighted above, many consumers are subscribing to paid-for VoD services on various platforms.