Whether it’s dozens of extra channels, streaming on demand, or internet TV through a set-top box, half of Australians now have paid television options in the home, Roy Morgan Research shows—and on-demand subscriptions have just overtaken Foxtel’s broadcast Pay TV.

In the six months to August 2016, 9.8 million Australians 14+ (50%) had access to one or more types of paid TV services in their home: Subscription Video on Demand (SVOD), Pay TV (linear, broadcast Foxtel channels), and Internet Protocol Television (IPTV).

For the first time, more Australians now have SVOD than linear Pay TV: 5,595,000 people (28%) vs 5,309,000 (27%). The bulk of SVOD’s growth is attributable to Netflix, but other services—Stan, Presto, Quickflix, the recently launched YouTube Red, and Foxtel’s own SVOD option Foxtel Play— can now be found in the homes of around 1.4 million Australians (although, to be fair, over 60% of these subscribers also have Netflix).

Despite the meteoric rise of SVOD since the arrival of Netflix early last year (and to a lesser extent, Stan), the number of people with Foxtel’s linear Pay TV in the home has also risen over the period, by an average of nearly 100,000 per quarter. The reach of IPTV, which includes both Fetch and Foxtel through T-Box, has also increased in the past year despite all the turbulence in the market: 629,000 Australians have IPTV in the home, up around 100,000 since the beginning of the SVOD boom. 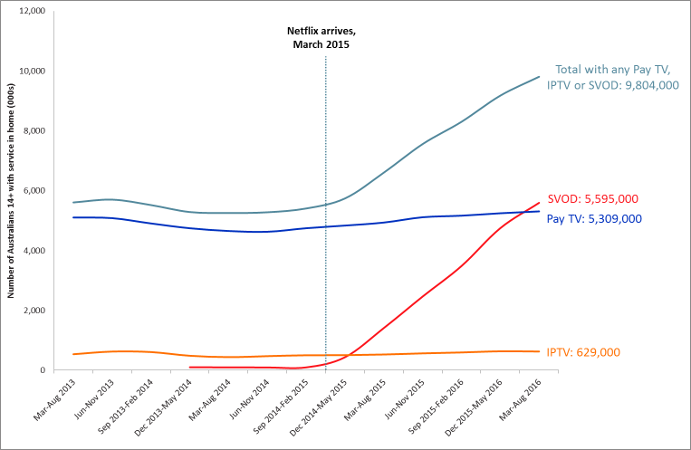 This chart clearly shows that SVOD’s rise expanded the overall ‘Paid TV’ market, rather than taking share from Foxtel’s linear Pay TV. The below snapshot shows where the main players now sit across the television landscape in free and paid, linear and on demand.

Michele Levine – CEO, Roy Morgan Research, says: “This week, Foxtel CEO Peter Tonagh announced the Pay TV provider plans to better compete with Netflix and Stan in the blossoming Subscription Video On Demand market by both enhancing and discounting Foxtel Play. At the ASTRA subscription media conference in Sydney, he reportedly highlighted that the ‘vast majority’ of TV viewing is still ‘live and linear’—that is, watched via a broadcast—but that Foxtel knows it still needs to develop some kind of competitive foothold in SVOD.

“Roy Morgan recently reported on just this trend in the Australian television landscape. Mr Tonagh’s claim is correct, with free-to-air television reaching nine in 10 Australians. However our latest research shows that, when it comes to paying for content, SVOD is already now more common than linear Foxtel.

“Foxtel’s long-term strength will, as Mr Tonagh noted, be in offering live sport and linear programming, including premium content sourced through its deal with HBO. However as more Australians choose to access content on demand, Foxtel will need to find creative ways to straddle both markets—which appeal to quite different people, with different budgets, tastes and habits.”