Netflix subs rise in Australia - but not everyone actually watches it

Second wind lifts Netflix over 5.75 million Australians – but not everyone actually watches it

A second wind has lifted Netflix’s Australian subscriber audience up over 5.75 million, the latest data from Roy Morgan Research shows. However while its reach is again rising, data released here for the first time reveals that over four in ten people with Netflix in the home watch less than three hours a week (including none whatsoever).

After a first year of rapid growth, by February 2016 the number of Australians (aged 14+) with Netflix service in the home had passed four million, and was still growing. Roy Morgan last published Subscription Video On Demand (SVOD) estimates for May 2016, reporting that almost five million Australians (25%) had the service.

A second wind for Netflix 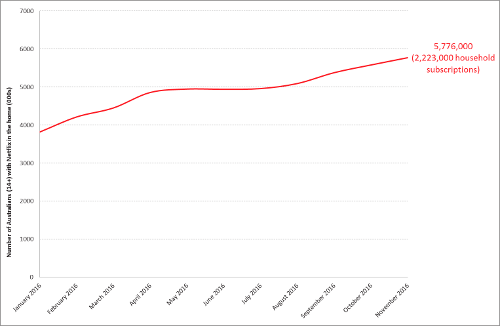 Over the next few months, Netflix’s growth appeared to stall—an indication that perhaps it had found its ceiling. However this plateau was short-lived: Netflix started growing again in August, and Roy Morgan’s up-to-minute November results show that today 5,776,000 Australians 14+ (29%) have Netflix in the home, through 2,223,000 household subscriptions. And so the question can be asked anew: how far will Netflix reach?

Aside from its massive potential reach, however, the bigger issue for other TV players—especially Free-to-Air networks and their advertisers—is just how much time Netflix subscribers spend watching it.

35% of people with a household Netflix subscription spend three to seven hours watching, and 14% spend eight to 14 hours. Less than one in 10 Netflix subscribers (9%) had a real ‘binge-viewing’ week, watching 15 or more hours of content.

How much time do Netflix subscribers spend watching it during the week? 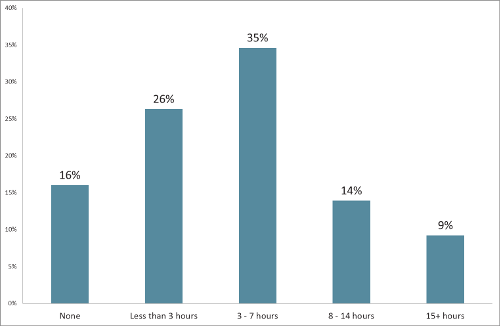 Roy Morgan’s data provides a guide to the average amounts of time subscribers spend watching Netflix (and SVOD generally) during the week. Of course, the fundamental appeal of ‘On Demand’ content is that it’s accessible whenever. A subscriber who binged the whole season of The Crown over a single weekend might not open Netflix again for a month; another might schedule one episode per week in line with the ritual of traditional linear TV.

Although the overall take-up of Netflix now rivals that of Foxtel, those with the Pay TV provider spend around twice as much time watching. The majority of Foxtel subscribers spend at least eight hours a week watching, including over a third who watch for 15 hours or more. Only around one in 20 people with Foxtel haven’t watched it at all in the last seven days.

Michele Levine, CEO – Roy Morgan Research, says: “It took just over a year for Netflix to reach one in four Australians—but what at first looked like a ceiling may well turn out to be a base.

“Over the past few months, almost half of Netflix’s total growth has come from homes of empty nesters aged 45 to 64. Notably, this is the most common household type in Australia—and their Netflix adoption still has plenty of room to grow.

“The full impact of Netflix as a competitor for viewership, and entertainment dollars, remains to be felt. Just yesterday, Netflix announced it was introducing a downloading option for mobiles and tablets, allowing subscribers to watch selected shows offline—starting with their original content including Orange is The New Black and The Crown.

“Video streaming weighs heavily on mobile data limits. Offline access now further distinguishes SVOD from traditional broadcast television, which remains an at-home media. Other free and paid-for media owners will need to continue to adapt to the new ‘on demand’ world of television in different ways.

“Local competitor Stan actually benefits from continued Netflix growth. As the more widely known service, Netflix is the gateway into SVOD. The bulk of Stan’s customers started with Netflix before adding the second service to their home entertainment mix.

“In its first year, Netflix had limited impact on Foxtel, with SVOD catering to a very different audience than Pay TV. However with mid-life households now discovering SVOD, this puts more pressure on the Pay TV service to justify its premium cost to subscribers. One good area to investigate is the big difference in how much time their subscribers spend watching compared with SVOD, and that its sports content appeals to men—who Roy Morgan’s research shows are much more likely to be the decision-maker when it comes to the home’s Pay TV services.

“Meanwhile Free-to-Air commercial networks recently launched Freeview FV app to deliver live and on-demand content to mobile devices. This and other developments from the commercial networks aim to keep viewers tuned in to their shows (and ads). However Roy Morgan’s data on usage of the networks’ existing online catch-up streaming services suggests that younger viewers in particularly won’t be reclaimed simply by offering the same content on demand.”