Just shy of five million people in the UK use pirated TV streaming services. Our new study suggests that 10% of the population (around 4.9 million adults) currently have access to platforms such as illegal Kodi boxes*, Amazon Fire TV Chipped Sticks, and illegal streaming apps on smartphones and tablets.

The research highlights the scale of the challenge that pirated streaming pose to subscription services. Since they entered the mainstream around 12 months ago, paid-for TV providers have come under significant pressure with one in seven (17%) users of the platforms – around 830,000 people – having already cancelled at least one subscription service. However, the number of subscriptions cancelled is likely to be lower given the discrepancy between households and individuals. 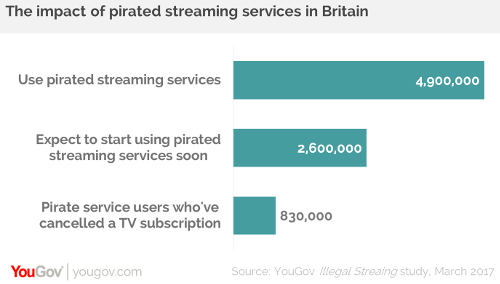 While we have started to see the damage this is causing to paid-for subscriptions – notably for sports and film channels – the indications are that this is just the beginning. Approaching a third (31%) of those who use pirated streaming platforms but who have paid-for TV services believe they will cancel their subscriptions over the next 12 months. Not only are those currently using these services starting to end their subscriptions to paid-for TV services, but over six in ten (63%) say they will recommend them to friends and family.

Furthermore, around 2.6 million non-users (6%) expect to start accessing pirated streaming platforms in the future, with around 400,000 people looking to start using them within the next three months. Among this group, almost nine in ten (87%) currently have a paid-for TV service. Half (49%) of these customers would expect to cancel a television subscription within 12 months of getting a pirated device.

Those who are not yet using the pirated platforms pose an even greater challenge to subscription services. Such streaming services are seen as being of significant financial benefit to users. Nearing half (46%) of those with access to one of the platforms think that their use has saved them money on film and TV viewing, with the average saving since they began their use being £212.

Alongside the short-term problem of cancelled subscriptions is a longer term one – namely, many of the people using pirated platforms are younger. Adoption of pirated platforms is especially high among millennials, with 18-34 year-olds accounting for 37% of users (1.8 million people). There is a real danger that having got used to getting TV services for free it will hard to convince them to pay in the future.

The study also includes findings from a series of focus groups YouGov ran both to explore the motivations of those who currently access the pirated platforms and the attitudes of those thinking of using them. They revealed that one felt that by using a pirate streaming platform they were not harming the industry as it already makes a lot of money. They stated that “ultimately the movie industry is booming…it is insignificant what they lose from streaming.”

Meanwhile the price of subscriptions meant that some feel as though they aren’t getting value for money from pay TV. One person thinking of abandoning their subscriptions in favour of using a pirated streaming platform had “mixed feelings” about the move as it would be “likely to increase prices for others.” However, they felt that sports streams are “ripping of the consumer and can see why people feel justified” in avoiding pay TV services.

* Kodi is software that is not illegal and is designed to play legally owned media or content from the internet. However, the software can be changed with third-party add-ons providing access to pirated copies of content. Some Kodi boxes have these third party apps already installed (often called ‘fully loaded’ boxes and these are illegal) and it is the use of these platforms that we have assessed here.