While unit shipments are expected to be up 1 percent in 2017 to 688 million units, compared to the previous year, area shipment forecasts show growth of 6 percent in the same period, to 180 million square meters. 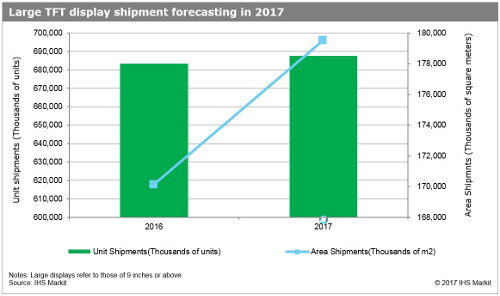 Among displays of 9 inches or larger, tablet PC displays are on track to record the highest year-on-year growth in unit shipments in 2017, with 10 percent growth to 93 million units. “It is because first-tier set brands are increasing the number of tablet PC models with larger screens. The new 10.5-inch iPad pro is a good example,” said Peter Su, principal analyst at IHS Markit.

The second fastest-growing application is notebook PC displays, with a 4 percent year-on-year growth to about 175 million units. “Chinese panel makers are aggressively trying to expand in this market, while first-tier panel makers are actually retreating panel production,” Su said.

On the flip side, TV displays are showing a contraction in 2017 by 3 percent year on year, dropping to 257 million units due to slower end-market demand. “Prices of large displays, particularly TV panels, have stayed high for almost a year. TV brands started revising down their business plan, cutting their panel purchases,” Su said.

In terms of area shipments, however, large displays for all applications are forecast to see growth in 2017 as larger screens become more popular with consumers. TV display accounts for 78 percent of total large display shipments by area, and is expected to see a 5 percent growth in 2017.

For a panel manufacturer’s perspective, preparing for potential oversupply in the near future is another reason behind the TV size migration. New fabs are under construction in China, including 10.5 generation, and could increase supply significantly. “One way for panel makers to overcome the oversupply is to increase area consumption via size migration,” Su said.

LG Display is expected to continue accounting for the largest market share in 2017 with 21 percent as measured by unit shipments. BOE, a Chinese display maker that has been increasing its shipments significantly, is forecast to take 20.7 percent, up 2 percentage points from 2016, gaining on LG Display.

The latest Large Area Display Market Tracker by IHS Markit provides information about the entire range of large display panels shipped worldwide and regionally, including monthly and quarterly revenues and shipments by display area, application, size and aspect ratio for each supplier.