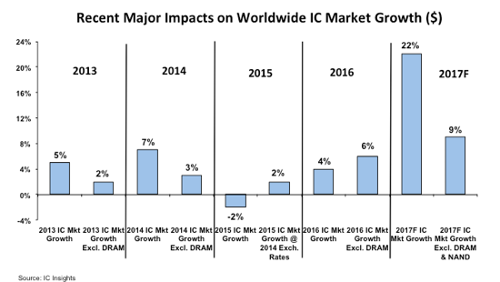 In addition to increasing the IC market forecast for this year, IC Insights has also increased its forecast for the O-S-D (optoelectronics, sensor/actuator, and discretes) market. In total, the semiconductor industry is now expected to register a 20% increase this year, up five percentage points from the 15% growth rate forecast in the Mid-Year Update.

At $72.0 billion, the DRAM market is forecast to be by far the largest single product category in the semiconductor industry in 2017, exceeding the expected NAND flash market ($49.8 billion) by $22.2 billion this year. As shown in Figure 1, the DRAM and NAND flash segments are forecast to have a strong positive impact of 13 percentage points on total IC market growth this year. Excluding these memory segments, the IC industry is forecast to grow by 9%, less than half of the current total IC market growth rate forecast of 22% when including these memory markets.