LONDON — High dynamic range (HDR) is the strongest-developing feature in television sets, according to a new report from IHS Markit (Nasdaq: INFO), a world leader in critical information, analytics and solutions. 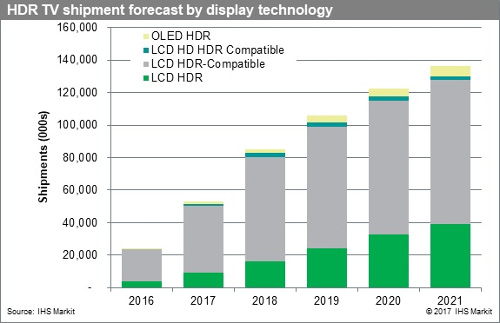 “HDR is the biggest improvement coming to TV viewing,” said Paul Gray, associate director for consumer devices at IHS Markit. “It has been conclusively demonstrated to have the biggest impact with viewers, and what’s more, the effect works regardless of screen size or resolution.”

Examined in the report are solutions that broadcast and consumer electronics researchers have launched to encode and transmit the extra data required for HDR, as well as forecasts for the different varieties of HDR televisions.

“We expect that only 23 percent of the ultra-high-definition televisions that ship in 2017 will offer the full HDR experience,” Gray said. “The remainder will be able to decode a signal, but lack the high contrast capability to display HDR content to an advantage.”

The cost of backlights for liquid-crystal displays (LCDs) remains the biggest obstacle to HDR, the analysis said.

HDR capabilities in high-definition (HD) TVs are also assessed in the report. Gray said, “In locations where the airwaves are congested, broadcasters have no spare space to transmit the extra data required for 4K UHD. However, HD with HDR provides a huge increase in perceived quality for a very low data overhead, and that’s incredibly interesting.”

IHS Markit forecasts that regionally, North America will lead with 14.6 million HDR sets shipping in 2021, while China will be second with 11.8 million. “North America remains the sweet spot for TVs, with a preference for large screens, the availability of rich UHD content and a willingness from consumers to buy full-featured sets,” Gray said. “While Chinese consumers are buying the biggest TV sets these days, price sensitivity is higher and UHD content is scarcer.”

IHS Markit analyst Paul Gray will present findings from the TV Design and Features Tracker at the 4K-HDR Summit in Málaga, Spain on November 10 at 13:40 local time.