10% of US broadband households switched, downgraded, or cancelled pay TV in past 12 months

10% of U.S. broadband households switched, downgraded, or cancelled their pay-TV service in past 12 months 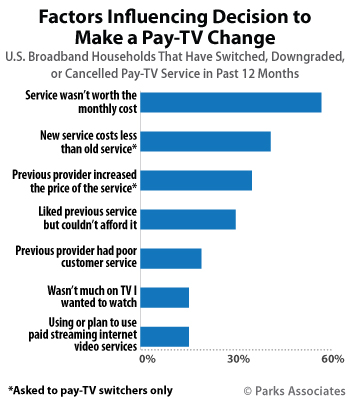 Parks Associates’ 360 View: Access and Entertainment Services in U.S. Broadband Households reveals that 10% of U.S. broadband households switched providers, downgraded their service, or cancelled pay-TV service in the past 12 months, primarily because of a negative perception of the service value, including statements that the “service wasn’t worth the monthly cost” or complaints that the service provider increased the price of the service. By comparison, 77% of U.S. broadband households currently subscribe to pay TV, a drop from 81% in late 2016.

“Poor perceived value is the leading factor driving cord cutting, downgrading services, or switching providers,” Brett Sappington, Senior Director of Research said. “It is a primary reason for consumer interest in online pay-TV services, which are typically available at a much lower price than traditional pay TV. Operator strategies to counter subscriber loss could include promotional options, including bundling OTT video services or the offer of free or subsidized CPE. Cord Cutters and Cord Shavers indicate these types of offers could entice them to keep their traditional pay-TV subscriptions.”