Aiming to be local everywhere, Amazon and Netflix ramp up content production

Since rolling out worldwide in 2016, Amazon and Netflix have both stepped up original video content production. Netflix launched 1,257 hours of original first-run content in 2017, well ahead of Amazon Prime Video’s 285 hours, according to business information provider IHS Markit (Nasdaq: INFO). Netflix has also dramatically increased its origination outside the US, with 402 hours launching last year.

International content accounted for 40 percent of Amazon’s total original first run output last year, compared to 32 percent for Netflix. The availability of local content is primarily how both platforms adapt their services to various countries, along with local currency pricing, local-language websites, dubbing and subtitling. 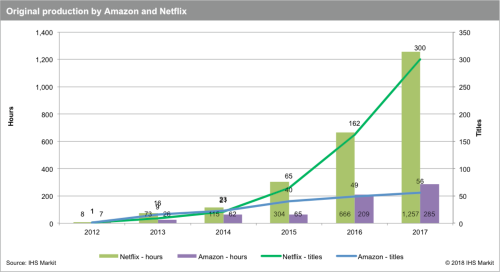 Netflix original production has skyrocketed, from the first season of “Lilyhammer” in 2012, to 300 titles in 2017. Offering content that is locally made, but which plays worldwide, is just one of the methods Netflix, in particular, has revolutionized the TV programming business.

While retail giant Amazon has stepped up original production, it is running well behind Netflix in overall volume. Amazon Prime Video also produced a single title in 2012, renewing a cancelled BBC series, “Ripper Street,” and the company has gone on to launch 56 original titles in 2017.

“Netflix and Amazon have cast a wide net, in terms of program genres, commissioning dramas and comedies, children’s live action and animation, documentaries and rights to theatrical movies,” said Tim Westcott, director of research and analysis, channels and programming, IHS Markit. “Both companies have also dabbled in reality TV, and they are expected to move further into this area in the future.”

According to the Channels and Programming Intelligence Service from IHS Markit, at the end of last year, Netflix had 52.8 million online streaming video subscribers in the United States. Netflix international subscriptions outstripped the US in 2017, with 57.8 million at the end of the year. Amazon Video subscribers in the US reached 30.2 million in 2017. Amazon Video, having switched on globally later than Netflix, is well behind in terms of subscribers outside the US, which totaled just under 15 million at the end of last year.

“In the linear TV era, channels produced programming primarily for domestic consumption, with international sales an often lucrative — but definitely secondary —revenue stream,” Westcott said. “The time-lag between US and international release also encouraged piracy of hit shows, like HBO’s ‘Game of Thrones.’ Now, both Amazon and Netflix are originating programming in order to capture a global audience, releasing their originals on the same day and date in multiple territories. This also means that non-US programming has the potential to find an audience in the world’s largest entertainment market — one where subtitled or dubbed programming has been almost unheard-of outside the art-house cinema circuit.”