SVOD became the largest OTT revenue source in 2014 by overtaking AVOD. SVOD revenues will climb by $51 billion between 2018 and 2024 to take its total to $87 billion. 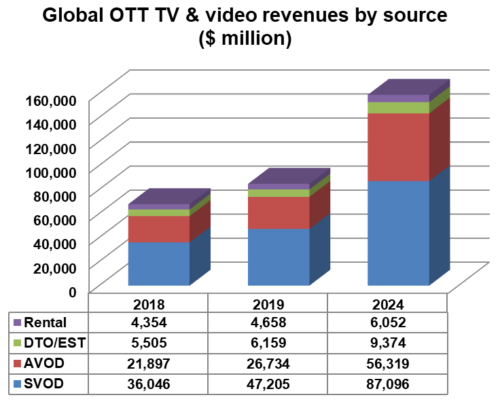 Simon Murray, Principal Analyst at Digital TV Research, said: “Despite losing market share to SVOD, there is still plenty of AVOD growth left. AVOD revenues will increase by $34 billion between 2018 and 2024 to take its total to $56 billion. Several high profile AVOD-funded platforms are due to start operations soon.”

The US will remain the dominant territory by some distance, with its share of global revenues staying just under 40%. Digital TV Research forecasts that revenues in the US will more than double between 2018 and 2024 – adding nearly $34 billion to reach $61 billion.