NEW YORK, NY — Cord-cutting in the US continues to accelerate, with the number of cord-cutting households jumping another 19.2% this year. According to eMarketer’s latest pay TV forecast, the number of households without a traditional pay TV subscription is quickly approaching those that have one. 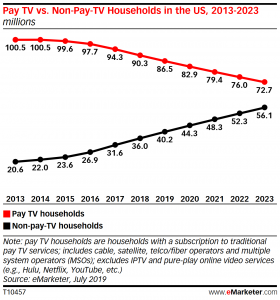 This year, the number of pay TV households in the US will decline by 4.2% to 86.5 million. With that negative growth rate holding relatively steady, the number of households subscribing to traditional pay TV services will drop below 80 million by 2021. At that time, more than one-fifth of households will be cord-cutters.

The growth of cord-cutting could partially be inflicted by TV providers themselves, as many are now prioritizing profit over revenues. That is coming at the expense of subscribers, who often drop services when prices rise and promotional deals don’t get renewed. 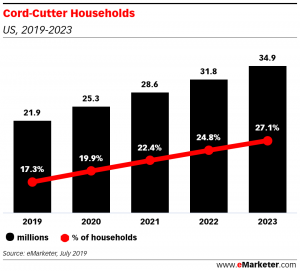 Satellite providers will take the biggest hit, with household subscriptions dropping 7.1% this year, followed by telco and cable with declines of 4.6% and 2.4%, respectively.

“As programming costs continue to rise, cable, satellite and telco operators are finding it difficult to turn a profit on some TV subscriptions,” eMarketer forecasting analyst Eric Haggstrom said. “Their answer has been to raise prices across the board, and it seems that they are willing to lose customers rather than retain them with unprofitable deals. This has been a boon for TV providers, who also offer broadband internet, as it removes consumers from bundled deals. It forces consumers to pay a higher price for internet, which dramatically improves profit margins.” 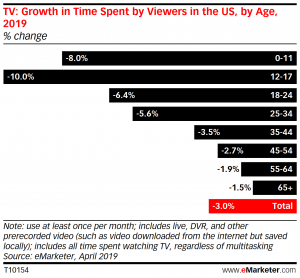 Not only is the number of TV viewers declining, but those who are still watching traditional TV are watching less. This year, TV time will drop 3.0% to 3 hours and 40 minutes on average among US TV viewers. All age groups are showing declines in time spent watching TV, but the largest drops are occurring among viewers 17 and under.

“As viewing time and the number of TV households drop, networks will have to sell ads at higher prices to account for lost viewership,” Haggstrom said. “This will become increasingly difficult to do over time. As a result, traditional TV networks such as Disney and NBCU are bulking up their direct-to-consumer [D2C] digital offerings in order to regain lost viewers.”