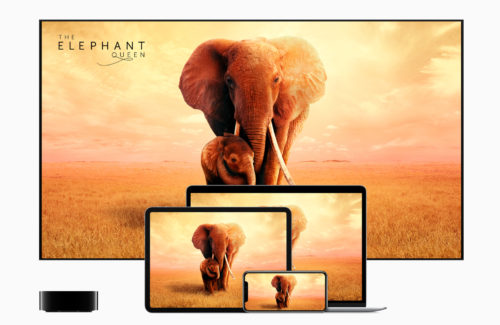 Apple Originals available now through Apple TV+ include “The Morning Show,” “See” and “For All Mankind,” all of which have debuted their first three episodes and will release a new episode weekly every Friday on the Apple TV app. Additionally, all episodes of “Dickinson,” as well as kids and family shows “Helpsters,” “Snoopy in Space” and “Ghostwriter,” are available to watch now. Customers can also enjoy the documentary film “The Elephant Queen,” as well as the first installment of “Oprah’s Book Club,” featuring Oprah Winfrey in conversation with Ta-Nehisi Coates discussing his novel “The Water Dancer.”(1)

“Audiences in over 100 countries and regions can now enjoy Apple TV+, home to an all-original lineup of powerful shows and movies from today’s greatest storytellers,” said Eddy Cue, Apple’s senior vice president of Internet Software and Services. “It was important for us to make it easy for everyone to watch across all their favorite screens, so Apple TV+ is the most broadly available Apple service ever from day one.”

“I’m beyond proud and so excited to introduce Emily Dickinson to a new generation with this series,” said Hailee Steinfeld, star and executive producer of “Dickinson.” “Emily is complex and inspiring and fearless. I can’t wait for audiences around the world to enjoy this amazing take on her life, crafted from the incredibly creative mind of Alena Smith. Being a part of this series with Apple and the debut of Apple TV+ truly feels like being a part of history.”

“I have loved working with Apple. I have never felt such freedom and support,” said Kerry Ehrin, showrunner and executive producer of “The Morning Show.” “It is a place to breathe as an artist. Not only have they been tremendous creative colleagues, but it also feels like family in the best ways. I’m very proud to be working with them. They are special.”

“I knew immediately when I signed on to ‘The Morning Show,’ it was going to be special, which to all of us meant it needed to be shared with the world in an equally as meaningful way,” said Mimi Leder, director and executive producer of “The Morning Show.” “Apple has been a tremendous partner from the time we first announced this project through release. We couldn’t be more thrilled to share the show with the world.”

“For All Mankind’ is an optimistic idea of what could have been and what still could be. It is about the way that reaching out into space can lift people up and give people something to hope for, to give themselves over to an idea that is bigger than now, and a sense of unity and moving forward for all mankind,” said Ronald D. Moore, creator, writer and executive producer of “For All Mankind.” “I think it’s a hopeful story that is painting a picture of society that we can all aspire to one day. In a sense, a story is alive when you first show it to people, and working with Apple we are able to share our story around the world.”

“This project is extremely personal to me, as I am blind, my mother is blind, and I have numerous relatives who are blind. Apple’s ‘See’ gave me the opportunity to impact the portrayal of blindness on the largest scale ever imagined,” said Joe Strechay, associate producer of “See.” “I have spent the last 16 years trying to improve opportunities for individuals who are blind or low vision, and ‘See’ gave me the opportunity to create accessibility in the work environment for actors, stunt performers and background actors who are blind or low vision. All of these individuals were chosen for their talents, and our show is better for it. Apple’s ‘See’ changed my life.”

New Apple Originals debuting in the coming months include series “Servant” (November 28), “Truth Be Told” (December 6) and “Little America,” and movies “Hala” and “The Banker.”

To subscribe to Apple TV+ and watch Apple Originals, customers can simply open the Apple TV app or visit the Apple website to sign up for the service for $4.99 per month with a seven-day free trial. Customers who purchase a new iPhone, iPad, Apple TV, iPod touch or Mac starting September 10, 2019 will receive one year of Apple TV+ for free. In addition, students around the world who subscribe to the Apple Music student plan can enjoy Apple TV+ for free.

Apple TV+ subscribers can watch Apple Originals ad-free and on demand, both online and offline, on the Apple TV app, which is already on iPhone, iPad, Apple TV, iPod touch and Mac. Apple TV+ is also available on the Apple TV app on select Samsung smart TVs and Roku and Amazon Fire TV devices. Customers with AirPlay 2-enabled Samsung, LG and VIZIO smart TVs can play Apple Originals from the Apple TV app on iPhone, iPad, iPod touch or Mac directly to their smart TVs. With Family Sharing, up to six family members can share one Apple TV+ subscription and watch using their own Apple ID and password on their own devices.

The Apple TV app will come to LG, Sony and VIZIO platforms in the future. Customers with eligible Sony smart TVs will be able to enjoy AirPlay 2 support later this year.

Audiences worldwide can stream Apple TV+ originals subtitled and/or dubbed in nearly 40 languages, including Subtitles for the Deaf and Hard-of-Hearing (SDH) or closed captions. Apple Originals are also available with audio descriptions in eight languages.