Disney+ gets some traction, Apple TV lags in streaming wars

NEW YORK and DUBLIN — Eagle Alpha’s latest report on the intensifying streaming wars suggests that Disney+ has gained some traction among consumers as Apple TV Plus lags and none of the new challengers to Netflix have yet to make significant inroads. 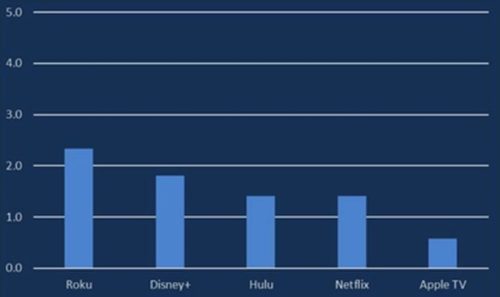 Eagle Alpha is the largest aggregator of alternative data globally with access to more than 1,000 datasets and solutions for corporations, private equity funds and buyside firms.

“It’s too early to predict how Disney+ and other new streaming challengers to Netflix will fare in the coming months, but early indications suggest legacy players, including Hulu, maybe in a stronger position than previously thought,” said Dean Barr, Eagle Alpha’s Head of Bespoke Projects. “Our research also suggests that Apple TV Plus is struggling to gain traction,” he added. 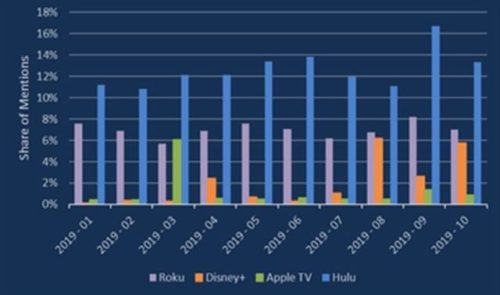 “Investors should look beyond last quarter’s financials to come to an informed judgment about who will prevail in battles looming ahead.”

Netflix continues to dominate share of voice on Twitter with about a 70% share, though it has dropped about 10 percentage points since mid-year as Disney+ (~ 6%) gained some traction, according to the report. But Disney still lags Hulu (~14%) and Roku (~7%) as Apple TV Plus (~1%) brings up the rear in fifth place out of five. 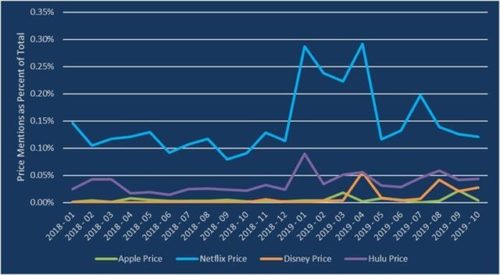 Price/cost as a percentage of total conversation

Meanwhile, total mentions of all streaming players, including HBO, Amazon and Showtime are up nearly 50% since Dec 2018.

Enthusiasm for Roku and Disney+ is slightly stronger than for Hulu and Netflix but all of them outstrip Apple TV Plus.