9 out of every 10 homes in Portugal have pay TV

ANACOM: 9 out of every 10 families have subscription television

In the 3rd quarter of 2020 (3Q2020), 9 out of every 10 families had the TV signal distribution service by subscription (TVS), representing growth of 3.6 percentage points (p.p.) in relation to the same quarter of the previous year. 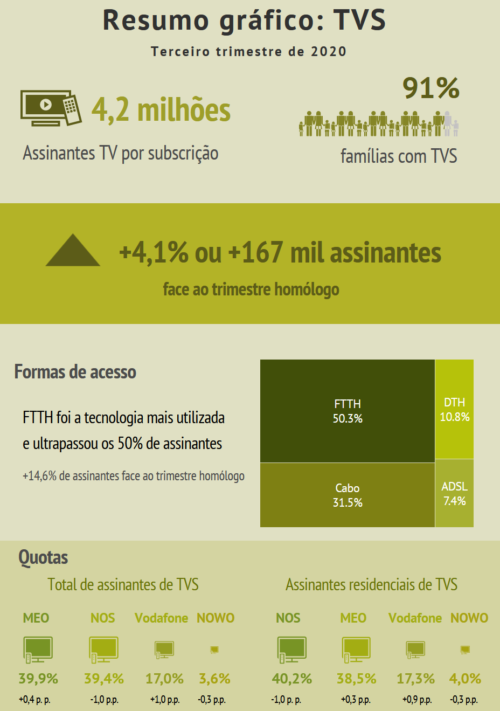 The number of subscribers to the TV signal distribution service reached 4.2 million, 167 thousand more (+4.1%) than in the same quarter of the previous year. This is the largest annual growth in absolute terms recorded since the end of 2015.

The growth of the TVS service was due to the offers based on optical fibre (FTTH), which recorded 270 thousand subscribers more than in the same quarter of the previous year (+14.6%), amounting to 2.1 million subscribers. This growth was not only due to the attraction of new customers, but also from the transfer to FTTH of customers who were previously supported by other networks.

In the 3Q2020, MEO – Serviços de Comunicações e Multimédia (MEO) was the provider with the highest share of subscribers to the TV signal distribution service (39.9%), followed by the NOS Group with 39,4%, Vodafone Portugal – Comunicações Pessoais (Vodafone) with 17.0% and NOWO Communications (NOWO) with 3.6%.

Vodafone and MEO were the providers that, in net terms, had the most subscribers compared to the same period of the previous year, with their shares having increased by 1.0 p.p. and 0.4 p.p., respectively. In contrast, there was a reduction in the shares of the NOS Group (-1.0 p.p.) and NOWO (-0.3 p.p.).