New data from Roy Morgan shows Australians consumed subscription TV services at an astonishing rate during 2020 as Australians endured a nation-wide lockdown from late March until late May and Victorians experienced a second, and longer, lockdown soon after. 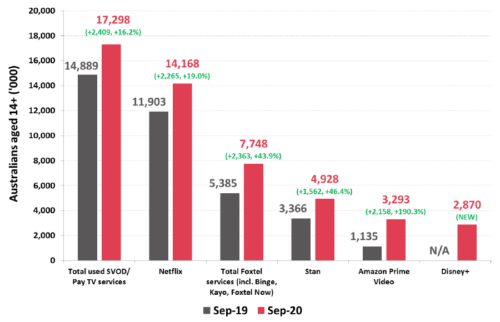 17.3 million Australians (82.1%) watched a subscription TV service in an average four weeks, up 2.4 million (+16.2%) from a year ago. During the last 12 months Australians have spent a lot of time indoors as smoke from summer bushfires a year ago soon gave way to COVID-19 restrictions that kept people largely at home for weeks and months on end.

All the major subscription TV services have been big winners during 2020 with large increases in viewers for Netflix, Foxtel, Stan, Disney+ and Amazon Prime in the three months to September 2020 compared to the same three month period a year ago.

Foxtel experienced even faster growth across its services this year and now has a total of 7,748,000 viewers of either Foxtel, Foxtel Now, Kayo Sports or Binge in an average four weeks, up 2,363,000 viewers from a year ago (+43.9%).

This new data comes from Roy Morgan Single Source, Australia’s most comprehensive consumer survey, derived from in-depth interviews with around 50,000 Australians each year.

Roy Morgan CEO Michele Levine says the hundreds of billions of dollars of Government stimulus and enforced lock-down measures that have kept millions of Australians at home during 2020 have delivered an ‘unprecedented boom’ to Australia’s subscription TV services:

“Subscription TV services have made large gains during 2020 with viewership soaring for the top five services compared to a year ago. The strong increases across the board mean more than 80% of Australians, 17.3 million, now watch Subscription TV in an average four weeks – up by more than 2.4 million viewers on a year ago.

“Netflix remains the clear market leader in Australia and grew its viewership by 2.26 million (+19.0%) from a year ago to 14.17 million viewers. Over two-thirds of all Australians aged 14+ (67.2%) now watch Netflix in an average four weeks.

“Foxtel’s growth in viewers has been even more impressive, up by 2.36 million to a viewership of 7.75 million across its four services of Foxtel, Foxtel Now, Kayo Sports and new streaming service Binge. All four have increased their viewership strongly during 2020 as locked down Australians sought out new content to pass the time.

“There are other clear winners as well including Stan which is now closing in quickly on 5 million viewers and has increased its viewership by 1.56 million (+46.4%) from a year ago to 4.93 million.

“Stan, a fully owned subsidiary of the Nine Entertainment Company, has recently expanded its content offering with the launch of ‘Stan Sport’ and has already signed the rights to live broadcast Australia’s Rugby Union matches as well as the Grand Slam tennis tournaments at Wimbledon and Roland Garros.

“Amazon Prime Video experienced a significant boost to growth in 2020 and nearly tripled its viewership from a year ago to 3.29 million (up 2.16 million, +190.3%) while Disney+ has attracted nearly as many viewers less than a year after launching with a viewership of 2.87 million.

“After a bumper year in 2020 the outlook for 2021 presents a new challenge as Government stimulus programs are progressively reduced and the ability to travel domestically (and in time internationally) without restriction is regained as border barriers come down and COVID-19 vaccines are rolled out.

The margin of error to be allowed for in any estimate depends mainly on the number of interviews on which it is based. Margin of error gives indications of the likely range within which estimates would be 95% likely to fall, expressed as the number of percentage points above or below the actual estimate. Allowance for design effects (such as stratification and weighting) should be made as appropriate.