7.5 million Australians are now watching ‘Broadcast Video on Demand’ such as 7plus, 9Now, 10 Play and ABC iView

Notably, all five leading services have grown compared to two years ago pre-pandemic, however ABC iView and SBS On Demand grew strongly during 2020 but lost viewers during 2021. In comparison, 7plus, 9Now and 10Play have all substantially increased their viewership during each of the past two years.

The leader of the three traditional commercial broadcasters is the Seven Network’s 7plus which is now viewed by 2.6 million Australians, an increase of 727,000 (+38.8%) from a year ago.

This new data comes from Roy Morgan Single Source, Australia’s most comprehensive consumer survey, derived from in-depth interviews with over 60,000 Australians each year. 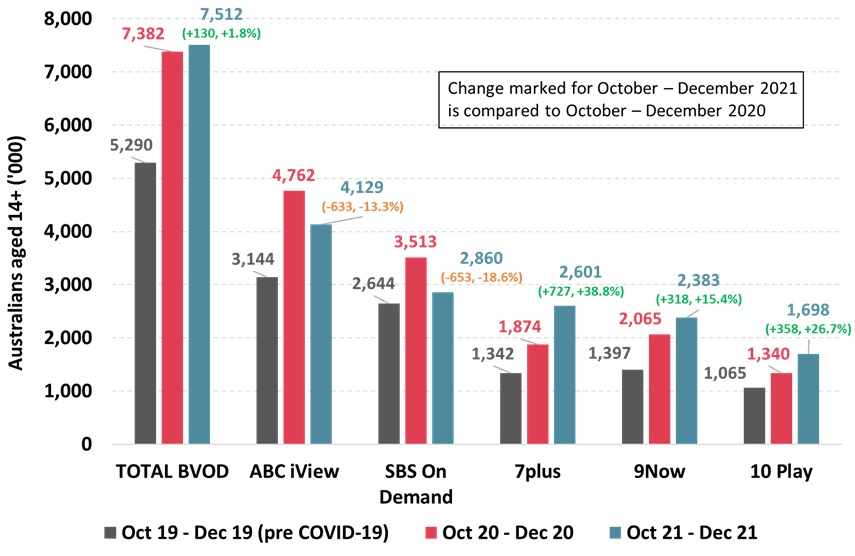 Roy Morgan CEO Michele Levine says viewership of ‘Video on Demand’ services offered by Free-to-Air broadcasters such as ABC iView, SBS On Demand, 7plus, 9Now and 10 Play boomed during 2020 as Australia experienced a nation-wide lockdown, however this growth levelled off in 2021:

“All five services experienced large growth in viewership during 2020 when the entire country was plunged into a nation-wide lockdown in the early stages of the pandemic. However, the across-the-board growth hasn’t been sustained in 2021, although the traditional commercial broadcasters have notched up a second straight year of growth.

“In contrast to the traditional commercial broadcasters, viewership of ABC iView and SBS On Demand has not maintained the growth seen during the early stages of the pandemic and was down by the end of 2021 compared with a year earlier.

“The trends seen for the free Video on Demand services offered by Australia’s ‘Free-to-Air’ broadcasters are similar to those seen for the leading Subscription TV services. The more well-established brands such as Netflix and Stan saw strong growth during the early stages of the pandemic during 2020 but were unable to continue this growth during 2021.

“However, newer services including Foxtel’s Binge & Kayo Sports, as well as newer entrants such as Disney+, have seen consistently strong growth during each of the last two years. These trends are explored in detail in a recent release on Australia’s Subscription TV market: Foxtel, Disney+ and Amazon Prime Video are the big improvers for Subscription TV during 2021, but Netflix still the largest.

“Looking forward, and with a widening array of streaming services for consumers to choose from, the competition between paid services and their free counterparts is only going to increase. The ‘boost’ provided to viewership by the unprecedented pandemic is unlikely to be repeated and securing growth going forward will depend more heavily on providing exciting and engaging content for viewers.”

The margin of error to be allowed for in any estimate depends mainly on the number of interviews on which it is based. Margin of error gives indications of the likely range within which estimates would be 95% likely to fall, expressed as the number of percentage points above or below the actual estimate. Allowance for design effects (such as stratification and weighting) should be made as appropriate.