BOSTON — Strong demand for home computers, tablets and games consoles helped consumer electronics trade revenues reach $358.5Bn in 2020, an increase of 7% over 2019, according to the latest research from Strategy Analytics. According to the report, Global Consumer Electronics Market Forecasts 2014-2024, shipments of home computers and tablets rose 11% to 396 million units last year, while revenues increased by 17% to $199Bn, as millions found themselves needing new devices for working and learning from home. Games console revenues rose 18% to $11.9Bn, driven by the launch of new consoles as well as lockdowns. Not every category was successful – sales of wireless speakers (including smart speakers) fell by 3% to 240 million units. TV sales were also down slightly (-2%) but this was a significant improvement on industry expectations earlier in 2020. 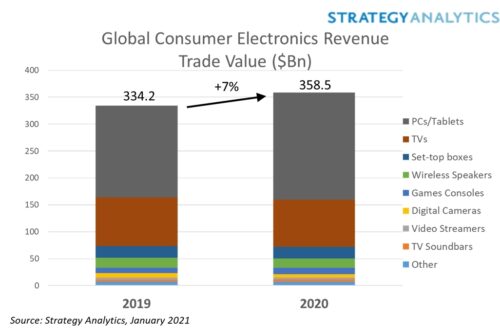 The 2020 outcome represents a substantial improvement overall compared to many projections made after the pandemic began. Strategy Analytics’ early 2020 forecasts had suggested a broadly flat market overall, but many vendors were bracing themselves for significant sales declines as anti-COVID19 measures were implemented in Q1 and Q2. While there were short-term disruptions in some categories, demand recovered in the second half of 2020. Government financial support measures played an important role, and there were even signs towards the end of the year that vendors were unable to meet demand.

“No one needs reminding that 2020 was an unusual year,” comments Eric Smith, Director, Connected Computing Devices. “Supply chains were initially thrown into disarray, but recovered remarkably well to meet stronger-than-expected demand. Against all expectations the industry still faced some supply constraints as 2020 came to an end, suggesting that WFH and LFH are still providing demand impetus as we enter 2021.”

“Looking at this data you would be forgiven for thinking 2020 was another normal year,” says David Watkins, Director, Connected Home Devices. “In contrast to doomladen predictions of economic collapse made as the pandemic took hold, consumers continued to find budget for technology which helped them through the crisis. Home entertainment has rarely been as important in people’s lives, and vendors of smart TVs, video streamers and games consoles stepped up to the plate.”