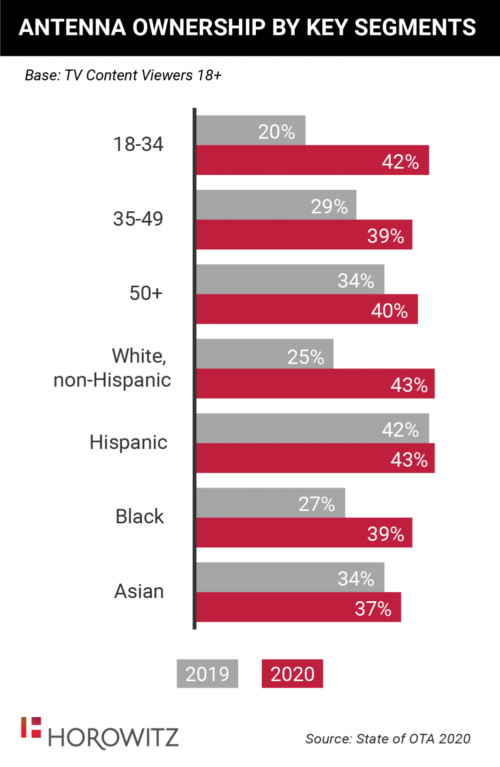 The picture of TV consumption – platforms and content, traditional and streamed, live linear and S/AVOD – is incomplete without capturing the ongoing, fast growing and potentially disrupting role of over-the-air (OTA) access to and viewing of TV content. According to Horowitz Research’s State of OTA 2020 study, two in five (40%) TV content viewers 18+ report owning an antenna, up from 29% year over year. With Nielsen estimating that there are 121 million TV households for the 2020-2021 TV season, this translates to approximately 48.4 million households with an antenna.

With Next Gen TV (ATSC 3.0) bringing more advanced features into the OTA space, growth in OTA can be expected to continue: 5% of TV content viewers 18+ in the Horowitz survey report say they are already planning to get an antenna in the next year and another 9% say they are “very likely” to get one after being presented with a description that details both traditional and advanced features like local broadcast stations, small, thin indoor/outdoor design and HD and DVR capabilities.

OTA viewers are largely not OTA-only viewers: OTA viewers frequently combine their antenna usage with MVPDs and/or streaming services. Antenna users in the State of OTA survey spend 6.4 hours a day watching TV and, on average, spend a third of their viewing time with over-the-air content. 82% of antenna users are also streamers and 59% also subscribe to an MVPD. 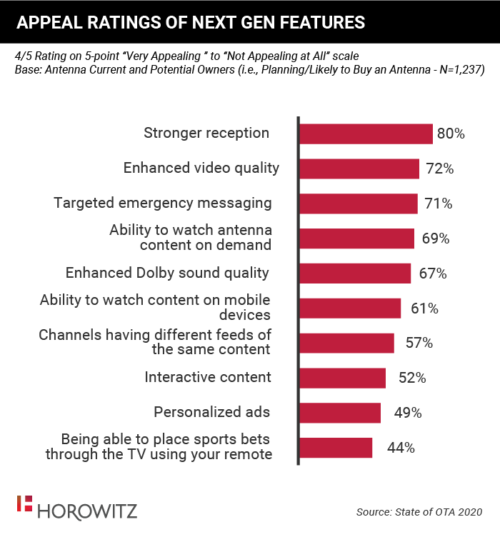 The State of OTA survey data indicate that the growth and impact of OTA and its place in the mix of MVPD and streaming delivered content and the concomitant adoption of Next Gen TV is likely to differ by geography in parallel with the differential rise of cable TV in rural, suburban and urban markets. In urban markets, 53% of TV content viewers 18+ currently own (47%) or intend to get an antenna compared to 41% in suburban markets and 38% in rural markets. Further, three-quarters (74%) of antenna users who live in urban areas report favorable ratings for their overall antenna experience, whereas satisfaction drops to 61% among users in rural areas of the country.

Stephanie Wong, director of insights and strategy at Horowitz, notes, “We have long known that one of the biggest drivers for keeping traditional cable and satellite TV service has been to stay connected with live and local TV content, such as local news and sports events. With the ever-growing mix of both on demand and linear streaming services, antennas can feed the need for this live and local TV content at minimal cost. In markets where the major broadcast networks can all be received–primarily urban—traditional operators need to pay close attention to the growth and impact of antennas, especially as new features rolling out with Next Gen TV turn antennas from a thing of the past to the newest TV technology.”

The full State of OTA 2020 report provides analysis of U.S. TV content viewers and antenna users. The survey was conducted in September-October 2020 in English and Spanish among 1,600 TV content viewers (816 among antenna owners). Data have been weighted to ensure results are representative of the overall TV universe. The report is available in total market, FOCUS Latino, FOCUS Black, and FOCUS Asian editions.

Topic areas covered in the full study include: