TDG: Watch Parties Get a Foothold During the Pandemic

LOS ANGELES — A new study by The Diffusion Group—a division of Screen Engine/ASI—finds one-in-seven adult SVOD users cowatched an online TV show or movie with friends or family during the pandemic. This and other insights are featured in TDG’s new report, The Rise of Social Viewing & Watch Parties. 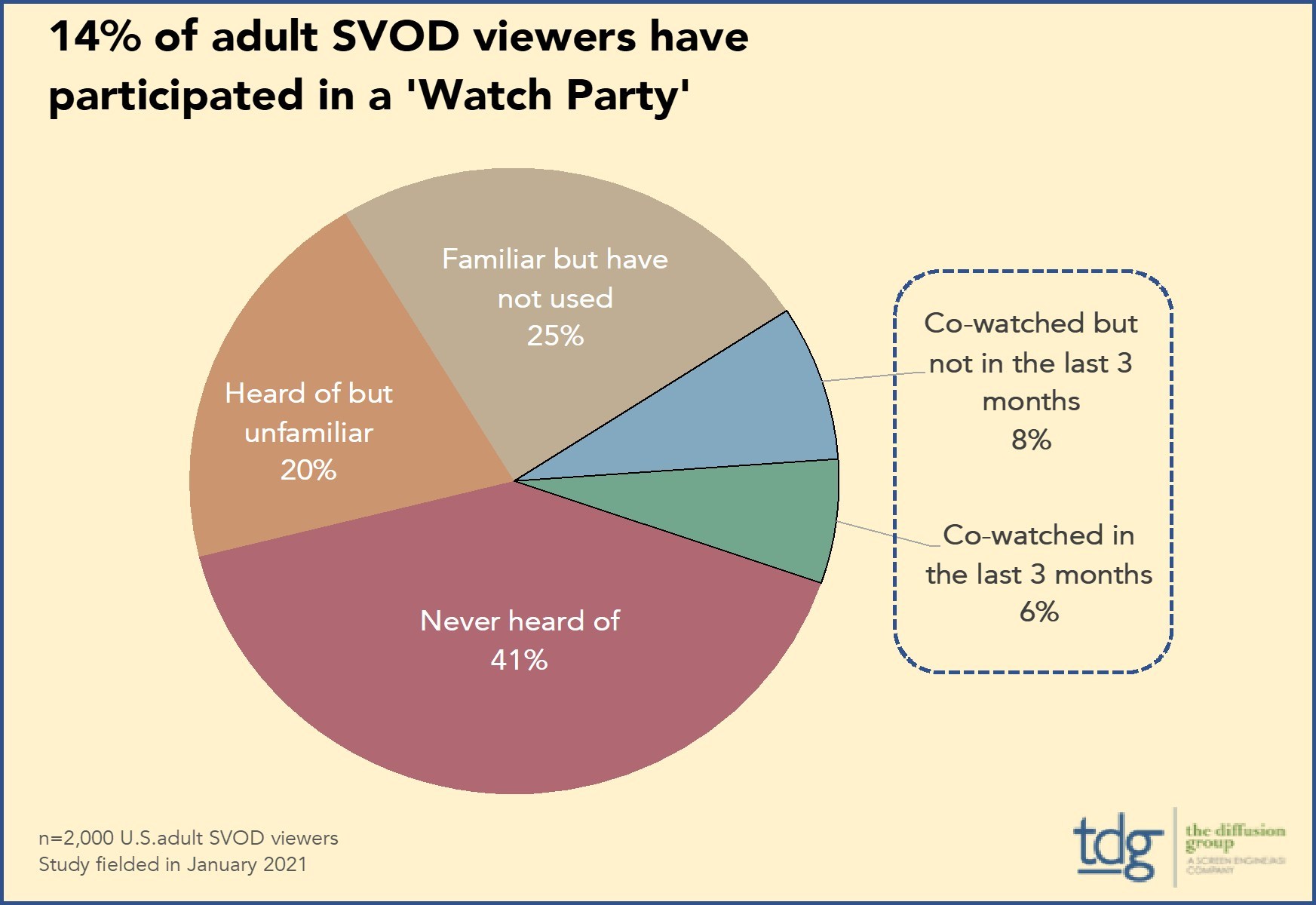 “The pandemic not only drove home media consumption, but accelerated the use of connected TVs and video-based chat,” said Lauren Kozak, Senior Analyst and author of the new report. “Not surprisingly, the two trends coalesced to create a new hybrid, the online watch party. In place of enjoying a movie with a friend or family member at a local theater, or sharing a TV show with guests at home, 25 million adults watched synched on-demand video with others outside their home via internet-connected screens.”

Prior to 2018, cowatching was relegated to DIY hacks and illegal streams, almost exclusively the domain of bleeding-edge tech adopters (aka, “Innovators”). In 2018, dedicated cowatching services Teleparty (formerly “Netflix Watch Party”) and Scener launched. As of early 2020, these services were still largely relegated to technophiles.

Beginning in March 2020, the fate of cowatching dramatically improved, with stay-at-home directives prompting a rush among major tech-media firms to add cowatching to their feature sets. Instagram moved first in March, and was soon followed by a flood of major streamers (Hulu, Disney+, Amazon Prime Video, and Sling TV among them). This influx of new tools accelerated awareness of, and experimentation with, cowatching.

Six-in-ten adult SVOD viewers have heard of cowatching, with three in ten acquainted with or using the feature. “That’s a big improvement in just 12 months,” notes Kozak. “And this pace of diffusion is likely to continue post-pandemic: 54% of those who have never cowatched an online movie or TV show are open to doing so.”

These are just a few of the actionable insights from TDG’s The Rise of Social Viewing & Watch Parties, others are listed below.