While demand for TVs underwent a slowdown in China and Europe due to the onset of the cyclical downturn, quarterly TV sales in North America reached a historical high in 1Q21 thanks to the proliferation of the stay-at-home economy and government-issued economic stimulus plans, such as the March 2021 handout of US$1,400 stimulus checks to most US citizens, according to TrendForce’s latest investigations. Bullish TV sales in North America propelled global TV shipment for 1Q21 to 49.96 million units, a 24.2% QoQ decrease but an 11.5% YoY increase. 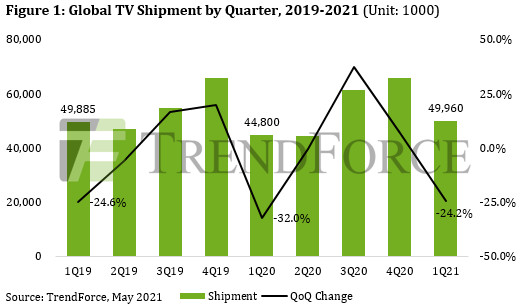 TrendForce further indicates that Hisense has been particularly aggressive in expanding in the overseas markets via consumer-friendly prices. Not only did Hisense successfully enter the top five list of the largest TV brands in North America in 1Q21, but the company’s market share also surpassed 10% and reached 11.1%, with a 4.19 million unit quarterly TV shipment, which represents an 8.8% increase YoY.

The gradual rise of TV set costs means companies are finding it difficult to offer peak season discounts. TrendForce is therefore revising its forecast of TV shipment for 2021 down to 221 million units.

The extended lead times for TV panels and other TV set components this year resulted in discrepancies in the sufficiency of various required materials for TV brands and ODMs/OEMs. As such, lead times for TV sets were in turn extended, causing some shipments to be deferred to 2Q21. In this light, TrendForce is revising its forecast of TV shipment for 2Q21 up to 52.38 million units, a 4.8% increase QoQ. However, as prices of TV panels have been skyrocketing for the past year, most brands are finding their lineups of mid-sized and small-sized TVs (43-inch and under) unprofitable. Brands have thus successively begun focusing on larger-sized and therefore more profitable products instead since the start of 2Q21. By doing this, TV brands are able to maximize their profitability through minimizing losses and expanding the production of TVs with high gross margins.

It should be pointed out that most TV brands are posting lower than expected shipment performances for 1H21 since the shortage of TV panels and IC components this year means brands have been unable to procure sufficient panels and other components used in TV set manufacturing. In addition, although brands historically began to plan out their Black Friday sales strategies with their channel distributors in the beginning of second quarters in years past, the persistent shortage of TV panels this year has led to a significant price hike. Therefore, how brands find balance between shipment and profitability will remain the key to determining the shipment of TV sets in the upcoming peak season.

TrendForce believes that, although brands have been adjusting their offerings through an emphasis on large-sized and highly profitable products since 2Q21, most of them lack killer products that are capable of significantly improving these brands’ shipment performances in the peak season. Hence, TV shipment for 2H21 is expected to undergo a 6.7% decrease YoY. All in all, owing to the impact of material shortage and cutbacks in mid-sized and small-sized TV shipments, TrendForce is revising its forecast of TV shipment for 2021 from 223 million units down to 221 million units, with the latter figure representing a 2% increase YoY, which is 0.8% lower than previously forecasted.