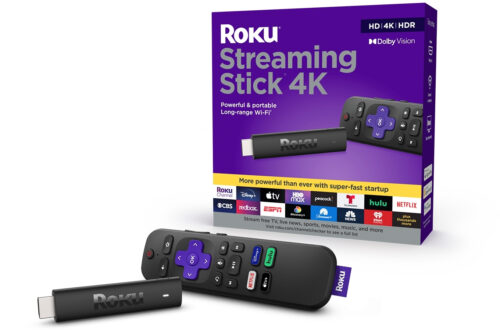 “The Roku Streaming Stick has been a fan favorite for years and we’ve redesigned it in the Roku Streaming Stick 4K to be faster and more powerful than ever,” said Mark Ely, Vice President, Retail Product Strategy at Roku. “It’s super-charged so you can stream in beautiful 4K and Dolby Vision even at a distance from your router and tucked neatly behind your TV. We’ve also added the Roku Voice Remote Pro to the Roku Streaming Stick 4K+ enabling TV lovers to find their remote just by using their voice – it’s also rechargeable and has been getting great feedback from customers. Whatever your streaming needs, we’ve got an incredible product lineup that features innovations from our singular focus on the TV streaming business.”

Roku Streaming Stick 4K is faster and more powerful than ever. It boots up to 30% faster — enabling smooth streaming in spectacular 4K, Dolby Vision®, and HDR10+ picture and features a redesigned long-range Wi-Fi® receiver that delivers up to 2x faster Wi-Fi speeds. The sleek design hides neatly behind your TV with simple setup. Consumers can start streaming in a snap and enjoy a massive selection of free, live, and premium TV, including award-winning Roku Originals only on The Roku Channel. Plus, easily search across thousands of channels with your voice and control your TV, streaming, and sound—all with the included remote.

The Roku Streaming Stick 4K will be available for $49.99 in the U.S. Additional features include:

The Roku Ultra LT has been refreshed with a faster processor, more storage, and a new Wi-Fi® radio that provides up to 50% longer range than the previous model. These changes help provide the smoothest possible streaming experience with channels that launch in a snap. The Roku Ultra LT now also supports Dolby Vision for superior picture quality as well as Bluetooth audio streaming and built-in ethernet support. The Roku Ultra LT is a Walmart exclusive in the U.S. available in the coming weeks for just $79.99.

Qualify to get 30 days of HBO Max included with the purchase and activation of a new streaming device between October 1, 2021 – January 14, 2022. During activation, this HBO Max offer will become visible to accept with additional instructions. (New subscribers only. Redeem by 1/22/22).

For Walmart shoppers, enjoy $5 off with Redbox. Find the code inside the Roku player box and redeem on the Redbox app. Offer expires 9/30/22.