NEW DELHI, BOSTON, TORONTO, LONDON, HONG KONG, BEIJING, TAIPEI, SEOUL — India’s smart TV market grew 74% YoY in Q2 2022, according to the latest research from Counterpoint’s IoT Service. The growth can be attributed to the increasing preference of customers for smart TVs, the launch of smaller size smart TVs in the sub-INR 20,000 ($250) range, and the increasing promotions by retailers and brands. There were considerable new product launches from brands to cater to different customers and increase offline presence. 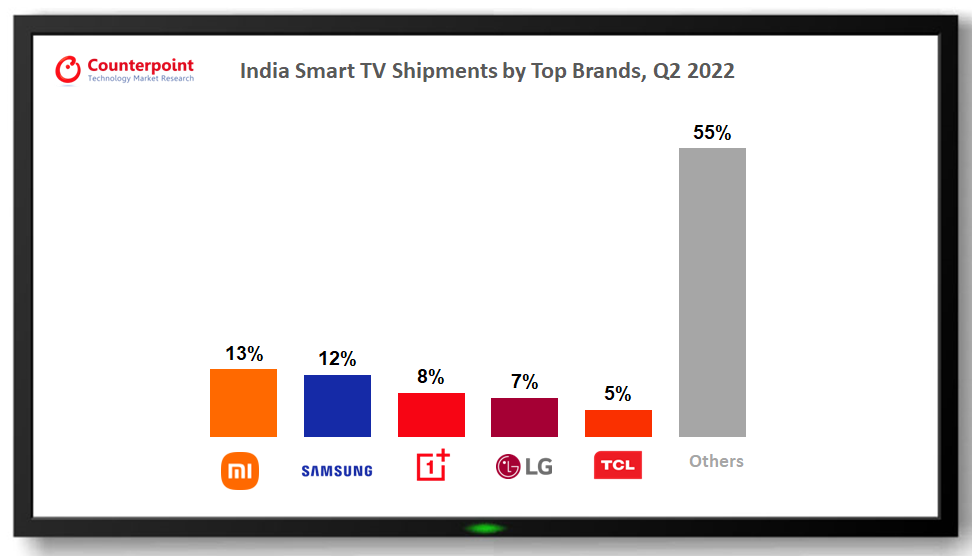 Looking at the overall market, Senior Research Analyst Anshika Jain said, “The top five brands contributed to 45% of the smart TV market with Xiaomi being the top player followed by Samsung with 13% and 12% shares respectively. OnePlus took the third spot for the very first time with 123% YoY growth in H1 2022 driven by the continued popularity of its affordable Y1 series, better features and strong marketing efforts. Many new brands are also entering the market to provide affordable devices to customers. The country’s smart TV penetration stood at 90% in Q2 2022, which is the highest ever to date and is expected to rise further with 21% YoY shipment growth in 2022 due to the coming festive season and continuously rising demand.”

Commenting on the market trends, Research Analyst Akash Jatwala said, “The smart TV market is growing as customers’ preference for smart TVs is increasing along with affordability. Brands are offering various sizes of TVs at different price ranges, and with the increase in broadband penetration, we expect the smart TV penetration to go up further. With the rise in inflation, consumers are shifting their preferences to other things. Against this backdrop, most of the new launches in Q2 2022 were in the 32” screen size and