LONDON — In the next five years, online advertising revenues will almost double from $190 billion in 2022 to $362 billion in 2027 according to latest research from Omdia.

Omdia Senior Research Director, Maria Rua Aguete said: “Netflix is expected to generate just under a quarter of its revenue from advertising by 2027 in the US. With growth in SVOD expected to increase from $86 billion in 2022 to $118 billion in 2027, it comes as no surprise that all the major SVOD services including Netflix want to take part in that growth.” 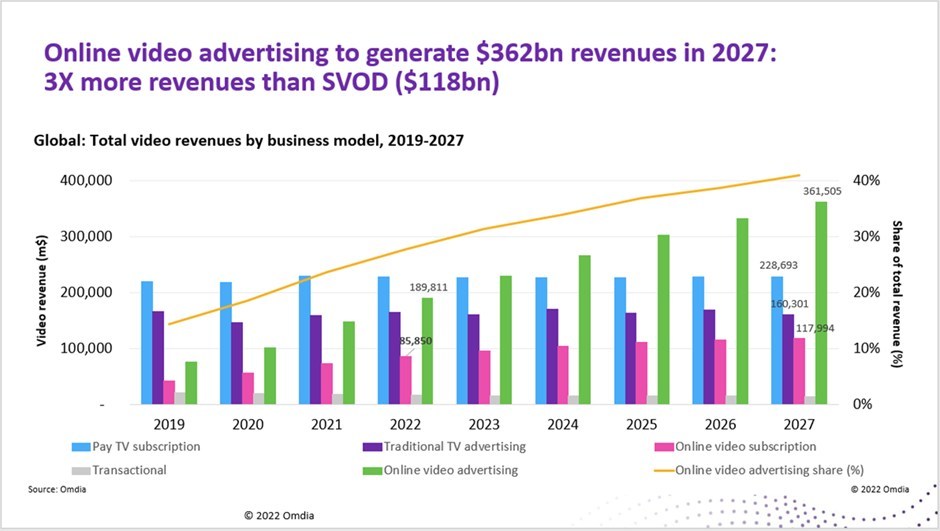 Omdia estimates that by 2027 nearly 60% of global Netflix subscribers will be on the ad-supported tier. This change will happen through a combination of new subscriber acquisition and “downgrading” of existing subscribers to ad-tier.

Ad load and ad formats are major tactical considerations in implementing hybrid models. Omdia expects Netflix to cap instream video ad loads and refrain from introducing ads in the user interface to maintain the premium consumer experience, particularly internationally, where hybrid models are not fully established. According to some reports, Netflix intends to keep the ad load below 4 mins per hour. This is on par with HBO Max ad load cap, but below all other hybrid streamers in the US. 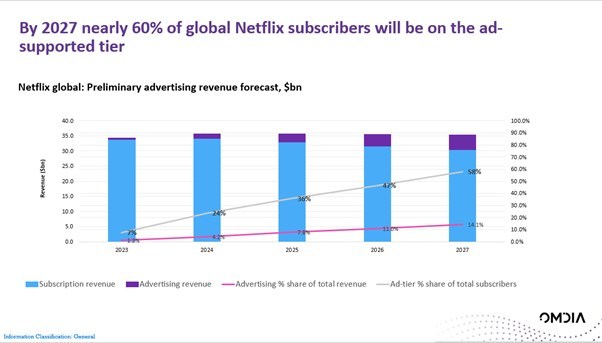 While in the US, Omdia expects Netflix to balance out ARPU on hybrid model tier to be roughly equal to premium tier consumer price despite the ad load capping, this will be a lot more challenging in far less mature international markets with lower CPMs and smaller pool of premium CTV advertisers. Under this assumption, Omdia expects that Netflix will generate 23% of their US revenue from instream advertising in 2027. Globally, this figure will be significantly lower at 14%. Although advertising will not displace subscription as the main source of Netflix revenue, the impact of Netflix advertising play on the wider competitive landscape should not be underestimated. Under this revenue model, Netflix will become a formidable CTV ad market player in the US, fully competitive with other prominent hybrid D2C models, such as Hulu, Peacock and Paramount+.