Today, KPN launches a totally new way of watching TV in the Netherlands. With KPN TV+, the very best of live TV and the best streaming apps come together on one screen for the first time. This will make it easy for TV viewers to seamlessly zap from their favorite TV channel to Netflix, Disney+ or Videoland and back again. And it is possible to search for a particular movie or series in the TV or streaming offerings, so you get the best entertainment at the touch of a button. With KPN TV+, KPN connects with the current generation of TV viewers for whom binge-watching Netflix and Videoland is at least as important as zapping between NPO and RTL. 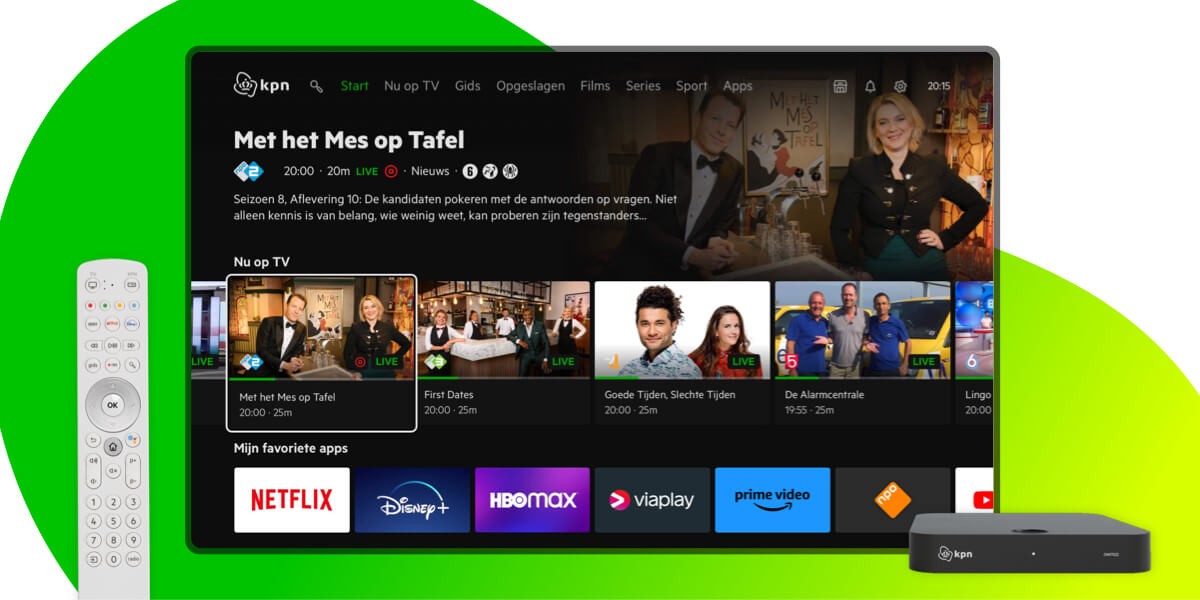 TV viewing has changed a lot in recent years. And as a result, there is more to see than ever, spread across different channels and apps. We are streaming and binge-watching like never before. So now we have to make it easier and more transparent. “I’m proud that we have brought together the best entertainment KPN has to offer – and that of course includes linear television – in a single new product – KPN TV+,” says Jochem de Jong, VP Partnerships, TV & Entertainment KPN.

Choosing what you watch

More than 3.6 million households have access to TV through KPN. “In addition to the millions of satisfied TV viewers, a rapidly growing number of customers are also interested in our entertainment offerings such as Netflix, Disney+ or Videoland without having to subscribe to traditional linear TV channels. That is now possible thanks to KPN TV+,” De Jong adds. “Nowadays, with so much on offer, it’s nice that you can simply turn your services on and off, even your TV channels.”

In addition to ‘cross-content search’ – being able to easily turn entertainment services on and off, zapping back and forth between streaming and live TV – it is possible to control KPN TV+ by voice via the remote control. With all these options, KPN wants to strengthen its position as market leader, also in terms of the best TV quality.

KPN TV+ with TV channels or streaming only

KPN TV+ is available to new KPN Internet customers starting today. For the most comprehensive entertainment experience, choose the KPN TV+ subscription met tv-zenders (with TV channels). You then get live TV channels and all your streaming apps in one place. For streamers who do not want to watch live TV channels, there is KPN TV+ alleen streamen (streaming only) at a very competitive price of €3.50 per month. Existing customers will also soon have the opportunity to switch to the latest TV product.