Derived from Cell/B.E.™ technology, will be applied to video processing

TOKYO–Toshiba Corporation today announced development of the “SpursEngine™”, a high-performance stream processor integrating Synergistic Processing Element (SPE) cores derived from the Cell Broadband Engine™ (Cell/B.E.™). The SpursEngine is expressly designed to bring the powerful capabilities of the Cell/B.E. technology to consumer electronics, and to take video processing in digital consumer products to new levels of realism and image quality. 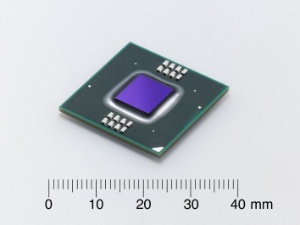 The prototype of SpursEngine will be unveiled at CEATEC JAPAN 2007, at Makuhari Messe, Japan, from October 2nd. Notebook PCs integrating SpursEngine will be used in the world’s first public demonstration of the processor’s capabilities in 3D image processing and manipulation: real-time transformations of hair styles and makeup that instantaneously recognize and process changes in position, angle, and facial expression, and render them as computer graphics. Toshiba also plans to demonstrate concept notebook PCs integrating the SpursEngine.

The new co-processor integrates four of Cell/B.E.’s high performance RISC core SPEs, half the number of the full configuration, plus hardware dedicated to decoding and encoding MPEG-2 and H.264 video. By combining the high level, real time processing software of the SPEs with the hardware video codecs, the SpursEngine realizes an optimized balance of processing flexibility and low power consumption. The prototype of SpursEngine operates at a clock frequency of 1.5GHz and consumes power at 10 to 20 watts.

Toshiba will bring SpursEngine to market after CEATEC, for application in various digital consumer products, and for use by customers and Toshiba itself, as soon as it completes specifications for commercial production.