Capitalizing on new technology and customers gained from its acquisition of certain assets from NXP Semiconductors in late 2009, U.S.-based semiconductor supplier Trident Microsystems Inc. (Nasdaq: TRID) in 2010 has stormed into the leadership position in the fast-growing market for television video processing chips, according to iSuppli Corp. 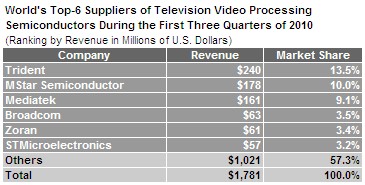 Trident had not led the market since the fourth quarter of 2007.

For the first nine months of 2010, Trident held a 13.5 percent share of the market revenue.

“Trident’s strong 2010 performance represents a complete turnaround from its weak results in 2008 and 2009,” said Randy Lawson, principal analyst and manager, for iSuppli. “Leveraging the acquisition of Dutch-based NXP’s television semiconductor business in late 2009, Trident has been able to gain leadership in the market for LCD-TV controller chips that support 120Hz-and-faster frame rates. NXP products and intellectual property also have allowed Trident to better address the market for smaller, lower-end LCD-TVs. Finally, NXP provided Trident with an invaluable customer base in South Korea, greatly expanding its sales.”

The Revolution is Televised

Trident’s stellar performance is coming amid a boom time for the global television processing chip market.

During the first three quarters of 2010, the television video processor market amounted to $1.78 billion, up more than 30 percent from the same period in 2009.

“Growth in the television processing semiconductor business is being generated by a number of market and technology trends specific to the TV segment, where dramatic product changes have–and will continue to be–introduced to the consumer marketplace,” Lawson said. “These trends are increasing the complexity and cost of video processing chips.”

The most significant trend remains the continuing transition away from Cathode-Ray Tube (CRT) technology and toward flat-panel alternatives, mainly LCDs. LCDs require more electronics not only to drive the panel, but also to address their shortcomings compared to CRTs or plasma displays.

One of these shortcomings is that LCDs have a slower pixel response time, which can cause motion in the video to appear to be blurred in the displayed image. Such an issue creates the need for complex motion adaptive video processing and panel drive schemes to be adopted by an ever-widening scope of LCD-TV models.

LCDs larger than 50-inches in size also require improvements in their contrast ratios in order to better compete with plasma screens. This spurs the need for dynamic backlight controls and video processing algorithms that must be added to processing chips.

Furthermore, an increasing percentage of flat-panel TVs are moving to Full HD resolution–i.e., 1,920 by 1,080 with progressive scan. The percentage of flat-panel TVs shipped supporting Full HD will rise to 75 percent by 2012, up from only 34 percent in 2009, iSuppli predicts. This again requires additional functionality in television processing chips.

A final trend enhancing the value of video processing chips is the addition of compelling new features to televisions, including Internet connectivity, user apps and 3-D display.

Zoran in the USA

Zoran Corp. (NASDAQ: ZRAN) of the United States is maintaining its dominance of the North American television video processor market in 2010.

Within the domestic Chinese market, MStar is even more dominant, achieving an estimated 70 percent share of flat-panel television video processor unit shipments during 2010.