BOSTON, MA — Allot Communications Ltd. (NASDAQ: ALLT), a leading supplier of service optimization and revenue generation solutions for fixed and mobile broadband service providers worldwide, announced today that its Allot MobileTrends Report shows that mobile data bandwidth usage continued its phenomenal rise with 73% growth during the second half (H2) of 2010. Video streaming continues to drive this growth as it remains the fastest growing application type, accounting for 37% of mobile bandwidth. Allot will be exhibiting at Mobile World Congress from 14-17 February, in hall 2, booth B53. 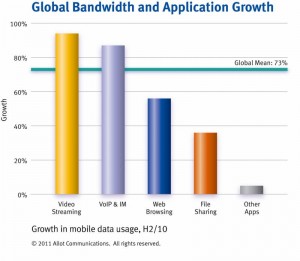 The H2 2010 MobileTrends Report reveals that YouTube is responsible for a tremendous 17% of mobile data bandwidth usage and continues as the single most significant website for video streaming, accounting for 45% of total video streaming traffic. The report also shows the continued exponential growth experienced by social networking applications such as Twitter and Facebook, which grew by 378% and 267%, respectively, underlining the natural synergy that exists between social media and the mobile Internet. The use of VoIP and IM applications also continued to grow rapidly with an 87% increase, demonstrating their ongoing appeal for subscribers.

This Allot MobileTrends Report also reveals that Google’s Android Market lags far behind Apple’s App Store with only 9% of the overall app store download traffic. However, its rapid 177% growth rate may influence this balance in the near future.

“Our MobileTrends findings demonstrate that mobile operators must understand the value that over-the-top applications provide to users rather than just focus on the amount of bandwidth they consume,” said Rami Hadar, President and CEO of Allot Communications. “As networks move towards 4G/LTE™ and convergence, understanding this value is likely to become even more critical as operators will be expected to provide a more enriched and personalized experience for their users.”

Findings from the Allot MobileTrends Report also include:

The Allot MobileTrends Report data was collected from July 1 to December 31, 2010 from leading mobile operators worldwide with a combined user base of 210 million subscribers. Allot gathered the data using the long term reporting capabilities of Allot NetXplorer, Allot’s centralized management and reporting system. The length of the collection period allows accurate identification of usage trends and patterns, reducing the influence of temporary events in the monitored networks.