Recent news of acquisitions and divestments in the U.S. cable market–most notably Cisco’s $5 billion purchase of NDS–underscore the industry’s shift in focus away from set-top box (STB) hardware and toward software and services that are designed to accommodate the booming opportunity for pay-TV multiscreen devices.

The number of multiscreen devices active on global pay-TV networks is expected to rise to 303.7 million units in 2015, up by a factor of more than 10 from 29.5 million in 2010, according to the IHS Screen Digest TV Multiscreen Intelligence Service at information and analytics provider IHS (NYSE: IHS). This contrasts with a relatively flat performance of the STB market, where the installed base of set-top boxes will grow at a compound annual rate (CAGR) of only 9 percent during the same period, compared to a 59 percent CAGR of active multiscreen devices.

The figure below presents the IHS forecast of multiscreen devices active worldwide on pay-TV networks. In the pay-TV world, multiscreen is defined as a service that allows the viewing of video on multiple platforms beyond the traditional mode of televisions connected to cable STBs. The multiscreen device category comprises a range of products, including smartphones, media tablets, portable media devices, video game consoles, personal computers and Internet-enabled televisions (IETVs). 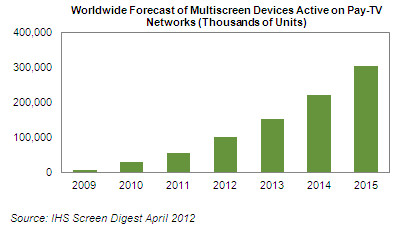 “While STBs will continue to represent a large market for U.S. cable companies, over the long term, multiscreen device access increasingly will become the core metric that determines the scale of operators’ coverage,” said Tom Morrod, senior principal analyst, TV Technology, for IHS. “To cash in on this trend, operators need digital rights management (DRM) technology and a compelling user interface (UI) that can be ported across multiple devices. The U.S. cable equipment market has been rife with news and rumors of corporate acquisitions and sales–all of which point to a shift in emphasis away from STB hardware and toward multiscreen software and services.”

The acquisition comes amid persistent rumors that Cisco is shopping around its STB and cable TV infrastructure division, the business unit that comprises assets purchased from Scientific Atlanta in 2005. At the time of the purchase, Cisco’s vision was that video would drive network capacity, spurring demand for its equipment. The company now appears to be massaging the details of this strategy to focus on software and services rather than hardware.

Meanwhile, the recently acquired, monolithic set-top and cable TV infrastructure equipment company Motorola Mobility is rumored to be up for a straight sale or spinoff by parent Google.

While there has been no firm indication that this will happen, evidence abounds. Google’s initial SEC filings for the Motorola Mobility purchase specified its intent to buy patent assets rather than Motorola’s professional hardware and software businesses.

In buying those businesses as well, Google may inadvertently have undermined the value of Motorola; key customers such as AT&T and Comcast may look warily toward the YouTube and Google Play owner when divulging their critical TV infrastructure and multiscreen plans. A quick, market-expected spinoff would be the best way for Google to retain and recapture value from the $12.5 billion deal, which resides in the patents related to mobile platforms and video delivery, which would likely support Google’s multiscreen strategy as well.

The multiscreen world cannot simply be understood in terms of the hardware balance–traditional STB and connected consumer electronics devices–that operators strike. In this world, software is key, and security that can tie together broadcast and broadband content streams is vital to maintaining value. Software and security solutions, specifically for managing conditional access (CA) and DRM interchanges safely, become more complex as operators begin to support viewing on multiple devices, rather than purely within the preconfigured STB environment with fixed middleware and CA.

The confirmed sale of more than $1 billion worth of yearly business in NDS and rumors of a further $10 billion of other business changing hands in the future, along with the combined value of Cisco and Motorola’s set-top box and TV infrastructure businesses, are all significant. The total value of the three markets at stake–the pay-TV STB industry, the pay-TV software and security industry and the pay-TV network infrastructure industry–are sizable. Respectively, they equate to about $13 billion, $4 billion and $10 billion.

However, what is possibly more telling is the five times multiple that Cisco is prepared to pay for NDS, compared to the market’s expectation of a one to two times multiple for the STB and infrastructure businesses. Even this would beat the multiple of around 0.3 times paid by Pace for Philips’ set-top division in 2007. Such expectations are a strong indication that the market perceives software and security to be as, if not more, important in the future, and that the current architecture of broadcast technology and digital receivers may alter radically in a multiscreen, multidevice world.

The set-top box business has quickly grown into the largest portion of the pay-TV industry, steadily doubling over the past 10 years. Now that most pay-TV platforms have migrated to digital networks and installed a large proportion of digital set-tops, market growth is starting to flatten out.

It is easy to argue that the STB will at some point fade away, as other consumer electronics products in the home become more capable of merging broadcast and IP content, and as more content is distributed over Internet connections. However, this may not necessarily be the case.

One way or another, devices in the home need to be provisioned with a broadcast stream–whether or not it’s delivered as IP over the operator’s network infrastructure. The devices also must be capable of amalgamating other IP content.

There exists a clear vision of the STB being relegated to the role of an optional but cost-effective extra, and serving as the entry point for a broadcast stream. This approach allows the operator to forgo congestion deep in its network, leverage its existing broadcast assets, but still ensure that within the subscriber home, content is still slung around as IP. Any device within a home network would then use an operator’s software platform, together with its own direct Internet connection, to create the complete user experience and UI.