IPTV - Subscribers Up in a Competitive Market

According to leading broadband analyst firm Point Topic, global IPTV subscriptions closed in on 60 million at the end of 2011, with the last yearly quarter witnessing the biggest three month increase in subscribers yet.

“The year end is often the strong quarter but in combination with the global recovery in consumer spending and the will and technical ability to deliver a service, IPTV is really starting to find the sweet spot,” comments Oliver Johnson, CEO of Point Topic. 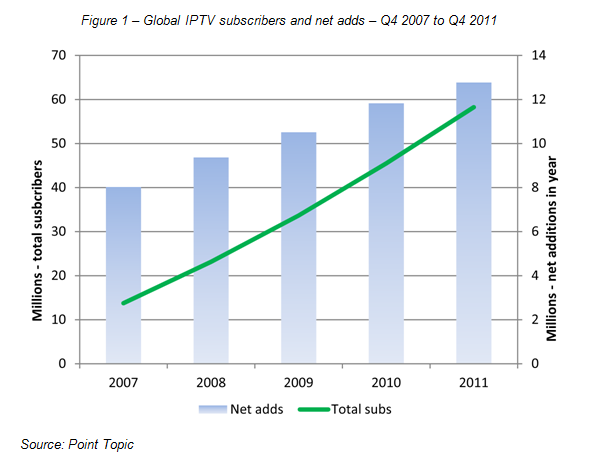 “In addition we’ve seen a growth in the Average Revenue per User (ARPU) the operators have managed to generate.”

These figures are taken from Point Topic’s Internet Video and Voice service, which provides a comprehensive view of the global internet video and voice markets.

IPTV as a service is very important to operators. It is the ‘stickiest’ of residential services and is a necessity for most ISPs. It also offers the best opportunity, at the moment, of increasing revenue.

“Globally ARPU increased by just under 2% in the year, total revenues were up over 30% and with the continued subscriber growth it looks like a very strong positive set of indicators.

“It is an extremely competitive market however. The technical path to deployment is well trodden but in combination with high equipment and content costs, and the increasing competition in the market IPTV is not a ‘slam dunk’ for operators,” says Johnson.

As margins from bare-bones broadband get ever smaller the future for operators is in value added services.

Johnson concludes: “Offering the right bundles for their consumers in a particular market, signing the right deals and maintaining a customer base in the face of global competition will be the mark of a successful ISP in the next few years. Get it wrong and they won’t see growth, get it right and their prize will be an income base worth several multiples of its yearly value.”