Pay TV revenues in North America will peak in 2013, before gradually falling by $2.6 billion to reach $88.2 billion in 2017, according to a new report from Digital TV Research. The Digital TV North America report concludes that TV ARPU is being forced down as cable operators and telcos convert their subscribers to dual-play or triple-play bundles, though blended [overall] ARPU is rising. 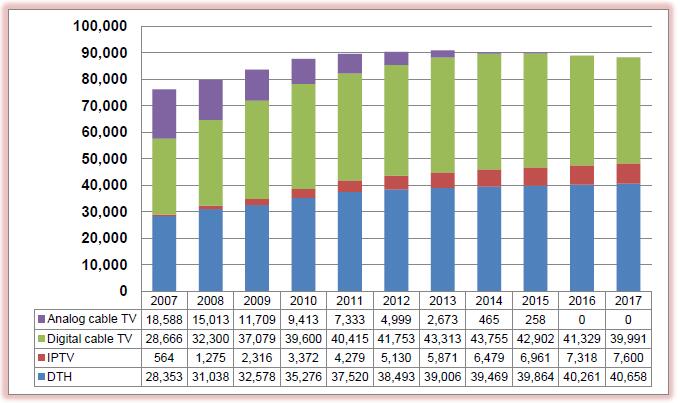 Report author Simon Murray said: “Pay TV penetration has almost reached saturation point in Canada and the US, so pay TV operators continue to fight between themselves (mainly to capture analog cable subs) for new subscribers.”

Despite no movement in the penetration figure, the number of pay TV subscribers will climb by 9 million between 2011 and 2017 to 120 million.

Although most analog cable subs will convert to digital cable, IPTV will also benefit, especially considering the aggressive pricing policies undertaken by the telcos. The number of homes paying for IPTV will climb by 73% between 2011 and 2017 to reach 15.8 million – or 11.5% of TV households. IPTV revenues will increase by a slightly higher rate to achieve $7.6 billion by 2017.