In 2015, 49 percent–or nearly half–of all devices obtaining television services from 43 of the largest global pay-TV operators that have commenced deployment of multiscreen services–will be PCs, smartphones, tablets and other so-called multiscreen devices, up from just 18 percent in 2011, according to the IHS Screen Digest TV Multiscreen Intelligence service at information and analytics provider IHS (NYSE: IHS). Meanwhile, STBs will decline to just 51 percent of pay-TV operator devices in 2015, down from 82 percent in 2011, as presented in the figure below. 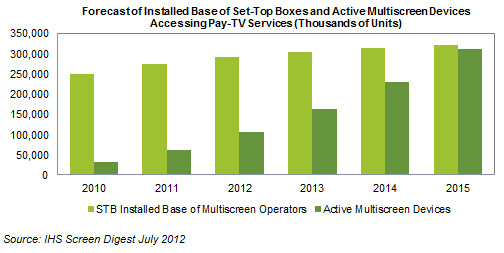 This means that in 2016, STBs will relinquish their customary position as the near-exclusive video consumption device among the 43 major cable, satellite and Internet protocol television (IPTV) providers that are proceeding with multiscreen deployments.

“A new era is dawning in the pay-TV industry, one in which subscribers can access television services on the device of their choosing, rather than being limited to using STBs,” said Tom Morrod, senior principal analyst, TV Technology, for IHS. “Consumers desire greater flexibility, demanding access to entertainment on any platform, in any location and at any time. Because of this, cable, satellite and IPTV operators are shifting their focus away from the STB and toward multiscreen deployment. For the 43 major operators tracked by IHS Screen Digest that have deployed multiscreen services, this means that multiscreen devices will supplant STBs as the leading pay-TV access devices by 2016.”

The total installed base of STBs is actually much larger, when incorporating pay-TV providers that aren’t engaging in the deployment of multiscreen services. The multiscreen operators accounted for only about one half of the global total of 538.8 million installed STBs in 2011, and will represent only about one third of the 849 million in 2015.

Multiscreen is defined as a service that allows the viewing of video on multiple platforms beyond the traditional mode of televisions connected to STBs. The multiscreen device category comprises a range of products, including smartphones, media tablets, portable media devices, video game consoles, personal computers and Internet-enabled televisions (IETVs).

PCs in 2011 were the most common devices associated with multiscreen pay-TV deployments. In second place were devices based on Apple Inc.’s iOS operating system, i.e., iPhones, iPads and the iPod touch. However, by 2015, the number of iOS devices accessing pay-TV services will rise by nearly 800 percent, while PCs will expand by only about half that rate.

Hot on the heels of iOS will be Android, whose base of devices connected to pay-TV will grow by more than 1,200 percent. In the Android market, the increasing availability of smartphones with larger screens and the rising shipments of tablets will propel the expanding use of pay-TV.

The leading pay-TV operators so far have focused on PCs and iOS in their first-phase multiscreen deployments, followed by Android in more recent distributions. Among the other platforms, Microsoft’s Xbox has also been a focus for the pay-TV companies, along with Smart TVs from Samsung and LG.

Operators at the Cutting Edge

By 2015, 11 pay-TV operators will be supporting content and subscribers on more multiscreen devices than on their own set-top boxes.

For example, Bell Canada, which has a very strong strategy for delivery of services to its mobile subscribers, will be supporting almost eight times as many phones and tablets in 2015 than STBs. Multiscreen devices will account for 89 percent of Bell Canada’s total consumer end-points, defined as the number of devices used by subscribers of the Canadian operator in order to access its pay-TV content.

Operators with larger STB installed bases, such as BSkyB in the U.K., also are expected to perform well, tipping the scale with approximately 1.5 devices per STB installed in 2015. The strength of BSkyB’s Sky Go and Now TV strategies will make the company a majority IP-to-multiscreen device operator by that time.

In the U.S. cable market where STB deployments are most widespread, Comcast will be nudging toward having one Xfinity or Streampix device per set-top box.