Opera’s HbbTV 2.0 SDK is now shipped on the first Freeview Play devices in the UK 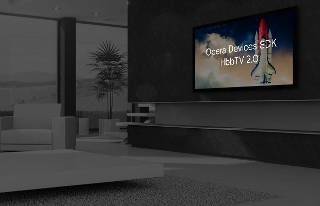 In September 2015 at IBC, Opera announced it was the first company to offer the ready-to-deploy Hybrid Broadcast and Broadband TV (HbbTV) 2.0 SDK to TV OEMs and set-top box manufacturers. HbbTV 2.0 is based on HTML5, aligning it with modern internet standards, which enables broadcasters to offer their viewers advanced experiences for digital streaming over linear programming.

A strong partnership, deep-rooted in modern technology, comes together to enable Freeview Play

“The Opera TV SDK has been deployed on millions of Humax set-top boxes since 2011,” says Graham North, Commercial Director, Humax, “Opera and Humax were once again quick to adapt to new market developments, making us the first to bring consumers advanced products with superior performance.”

Opera’s HbbTV 2.0 SDK is built on top of Opera’s TV SDK, which is highly optimized for Smart TV and set-top box hardware and supports a wide range of standards and use cases. The SDK brings the industry’s latest HTML5 capabilities to TV, and includes Opera’s Unified Video Architecture (UVA), which supports all major video streaming standards in use by content owners, allowing for playback of popular consumer OTT services.

“We’re delighted today, as our agility in building a complex, industry-first product – and our strong partnership with Humax – has resulted in a win for consumers and the industry at large,” says Aneesh Rajaram, Senior Vice-President for TV and Devices at Opera. “Opera TV continues to work hard to empower content owners, device manufacturers and service providers to offer the most compelling proposition for their consumers. And, with HbbTV 2.0 now live in the market, we expect more OEMs and set-top box manufacturers to deploy this standard in the coming months,” Rajaram adds.