Broadband share of video viewing to double in next decade

TDG: Broadband’s Share of Total Video Viewing to Double in Next Decade

PLANO, TX — A new groundbreaking study from The Diffusion Group (TDG) details the coming shift from Legacy TV to Broadband Video sources over the next decade. Broadband Video will grow from 17% of total viewing minutes in 2015 to 38% by 2025, up 81%, while Legacy TV will decline from 80% of total viewing minutes to 53%, down 34%. These and other insights are featured in TDG’s latest report, The Future of TV Viewing, 2016-2025. 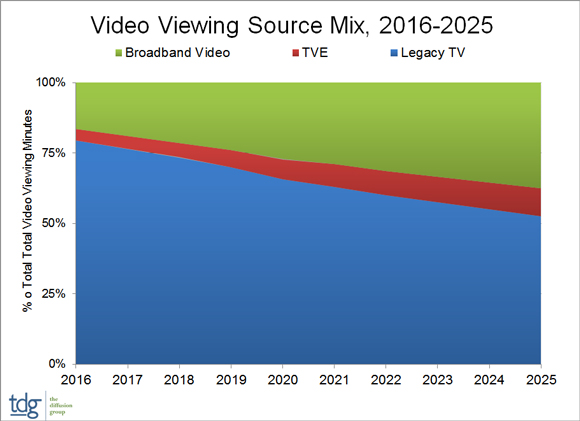 “Professionally-produced, TV-quality video is now accessible from a widening array of sources and services, in virtually any context, and on multiple devices,” notes Joel Espelien, TDG senior analyst and author of the new report. “Though operators and networks are now aware of these trends, few have any idea what they mean for the future of TV viewing — that is, the extent to and rate at which they will redefine the viewing mix in the next decade.”

Espelien notes that we are now squarely in the era of quantum media, a future TDG first described in 2006 and forecast would come to pass by 2015. And while its influence is now undeniable — simply look at the number of public data points for cross-platform viewing — there are few, if any, serious efforts to quantify how these trends will impact video viewing time over the next decade.

The unique insights contained in The Future of TV Viewing, 2016-2025 are available as a written report for purchase on the TDG website, as well as via webinar and in-person consulting sessions for TDG Members.