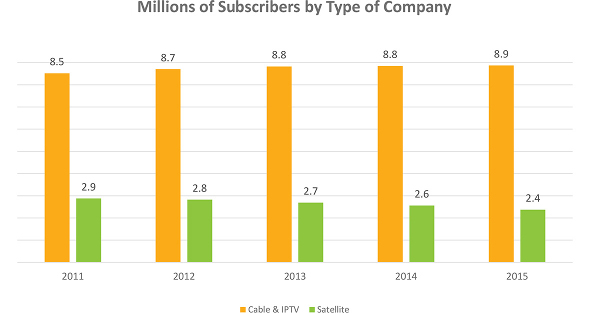 Cable, IPTV and satellite companies garnered 11.2 million subscribers in 2015, a -1.4% (157,922 subscribers) decline from 2014. This negative trend has been accelerating since its start in 2013. Of note, subscription to IPTV services recorded a double-digit growth rate in 2015, however, these gains were insufficient to offset the combined declines in cable and satellite services.

Spending by television service providers on the creation and production of Canadian-made content decreased by $38.1 million in 2015 to $436.9 million. Of this amount, $219.6 million was directed to the Canada Media Fund, $64.7 million to independent funds and $152.6 million to community channels and other sources of local content.

The CRTC’s report on cable, IPTV and satellite companies does not include information on Internet access, telephone services and other non-programming items. The CRTC will publish information on these services in the upcoming edition of the Communications Monitoring Report, in fall 2016.