Western European OTT TV and video revenues will more than double between 2015 and 2021. However, growth rates will vary considerably between the 17 countries covered in the Western Europe OTT TV & Video Forecasts report.

Simon Murray, Principal Analyst at Digital TV Research, said: “OTT adoption is already high in Scandinavia, the Netherlands and the UK, but it has been much more muted in other countries such as France, Spain and Portugal.” 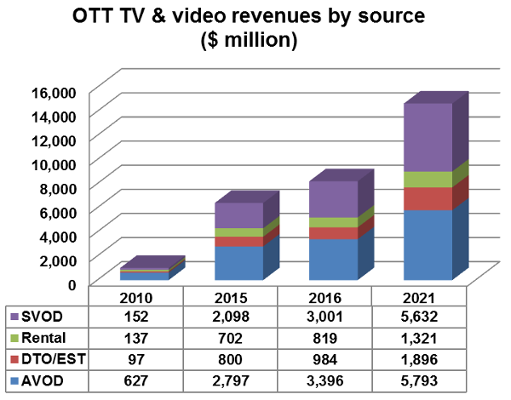 SVOD [subscription video on-demand] will become the region’s largest OTT revenue source in 2018 before AVOD [advertising on OTT sites] regains its crown in 2020. The AVOD sector has been boosted by the rapid expansion in mobile advertising.

Sweden will have more SVOD subscribers than Spain in 2021, despite only having a quarter of the population. Despite this, the number of subscriptions will quadruple in France and Italy between 2015 and 2021 and will grow eightfold in Spain.

Murray explained: “The Spanish SVOD sector is stifled as Telefonica provides its Yomvi SVOD platform free to its pay TV subscribers. Yomvi is no longer offered as a standalone service. This also degrades the perceived value of the other SVOD platforms.”

He continued: “France’s relatively low take-up is harder to explain as there is a good selection of SVOD platforms on offer. However, government-imposed release windows dictate that SVOD platforms can only screen movies well after they have appeared on other platforms.”