Three-quarters of US broadband households now have a connected TV

TDG: Three-Fourths of US Broadband Households Now Have an Internet-Connected TV

PLANO, TX — According to new research from The Diffusion Group (TDG), the penetration of Internet-connected TVs among US broadband households has increased nearly 50% since 2013, from 50% to 74% at year-end 2016. 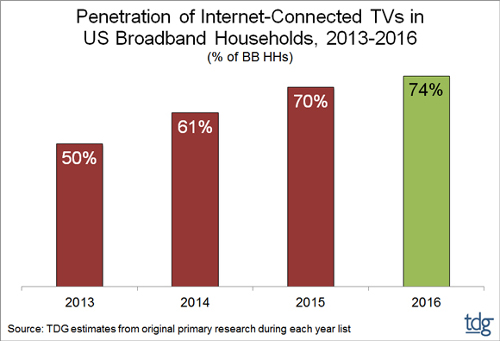 Connected-TV penetration grew 22% between 2013 and 2014, and another 15% between 2014 and 2015. Of late, however, growth has slowed to only 4%, a significant but not unexpected turn according to Michael Greeson, TDG President and Director of Research.

As TDG first noted in 2004, the diffusion of connected TVs would closely follow broadband uptake, and as broadband growth begins to slow, so too does the number of new connected-TV users. TDG’s latest research validates this insight.

“At 74% penetration, connected TV use is squarely in the Late Mainstream phase of its trajectory,” says Greeson. “Barring any major disruption in TV technology or market conditions, growth will slow each year as the solution reaches saturation.”

That said, pervasive access brings with it a wide range of opportunities, especially when it comes to video services. “Broadband pay-TV services are particularly well positioned to leverage this utility, which permits scale at much lower costs.”

Founded in 2004, TDG continues its long history of deep primary research and accurate market forecasting on the connected consumer and video behavior. The most recent data regarding connected TV use was drawn from TDG’s annual study, Video Behavior in the Age of Quantum Media, which is now available for public purchase. A survey of nearly 2,000 US adult broadband users fielded in early December 2016, the study offers insights into video habits and preferences across multiple conduits, multiple screens, and multiple contexts. For more information about this new project, contact [email protected] or call 469-287-8050.