More than half of U.S. adult broadband users watch FAST services on TV 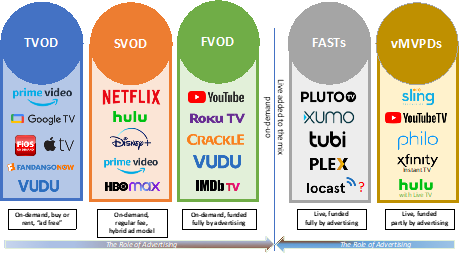 “Clearly the effects of work-from-home and lack of traditional leisure options during the pandemic accelerated consumer use of free ad-supported streaming services,” says Doug Montgomery, TDG Senior Analyst and a 15-year veteran with WarnerMedia. “Most major video providers have been preparing for this moment for years and thus able to quickly adapt to an accelerated timeline. It is a unique moment in the history of the entertainment business and those who move quickly and boldly will likely reap the benefits for years to come.”

Montgomery notes that, while there is “a kaleidoscope” of new providers, pricing plans, and content sources available to the CTV viewers, yesterday’s video revenue models persist—that is, à la carte, subscription, and free. Technologies may change, but the fundamental revenue models do not.

He also recognizes widespread confusion among both industry and popular press as to what “AVOD” actually means. Two distinct streaming-video revenue models, FVOD and FASTs, are folded under the AVOD umbrella, when in fact any streaming revenue model can have an advertising component. Advertising, then, should be understood not as a vertical but rather as a common revenue model that all verticals can leverage for revenue.

TDG research finds that, among those that view free ad-supported streaming video on TV, 24% do so daily and another 32% weekly, which is encouraging given that these services are primarily comprised of older shows and movies—at least the on-demand portion. The remaining 44% view monthly or less.

Other findings of TDG’s new report include the following.

TDG’s latest report, ‘The Rise of Free Ad-Supported Streaming’, is available for free to TDG Members and for purchase to all others. For more information about the report, contact TDG directly.