ATLANTA — Hisense will copy successful its operating system in China, and set up an American Internet-TV operation center.

Hisense has 2.6 million TV subscribers in the US, and the figure is projected to increase to exceed 6 million by 2018, and it will cover 20 million American households (calculated by average number of American resident). 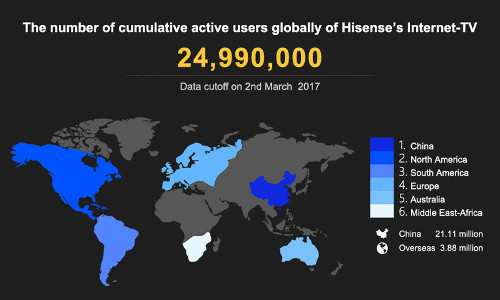 Hisense, the multinational consumer technology manufacturer and one of the largest television brands in the world, was phenomenal, ranking third in global shipments of LCD TVs and No.1 in the Chinese market, where Hisense has held that spot for 13 consecutive years. Hisense had 23.43 million Internet-TV users, and the number of daily active users only in China has reached 11 million in February. Hisense has already truly become the biggest Internet-TV platform in China.

Netflix is the content partner with Hisense TV in the US and its user activity ranks the top compared with other partners. The primary aim of Hisense was to enrich and differentiate the content and thereby increase the sales competitive power of Hisense TV.

Netflix, one of the American biggest streaming media operators, has a strict requirement for its certification on audiovisual effects, display technology and image data processing technology. Hisense is the only company that has received NRTV certification in China, winning the content partner Netflix.

Based on huge shipments of Hisense TV, Hisense has put the television content operation into its business. The company Juhaokan, which is an individual corporation owned by Hisense Group, took on the business section. Hisense will close the company’s series A financing in 2017 by the shareholding structural reform. Setting up the American internet-TV operation center relates to its capital investment.

The complete set of law institutions of consumer protection and copyright protection of the United States will bring a huge challenge for Hisense.