Entertainment TV is innovating in order to conquer audiences

Essential in television channel schedules around the world, on average, entertainment represents 33% of prime time programming. It is also increasingly powerful: it boosts the prime time audience share for ¾ of the channels studied (7 out of 10 in 2015). The genre is an asset for main private channels: on average, they broadcast 447 hours of it during prime time, twice as much as main public channels. On these private channels, focus is also put on programmes that use tricks taken from reality TV.

Here are the main findings of the latest issue of the Entertainment Report, which studied 37,058 hours of entertainment on 89 channels in 11 countries.

New sources of inspiration in order to revitalise the genre 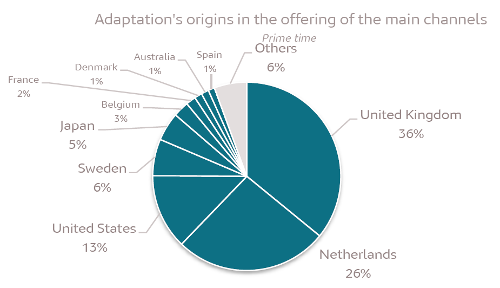 In 2016, a concentration of the most popular prime time formats was noted. 20 separate formats took their place in the entertainment top 15 in at least two different countries, whereas this number stood at 24 in 2015. However, the popular formats were in the rankings of more countries. Two programmes, Got Talent and Strictly Come Dancing, appeared in seven national top spots in 2016 (out of 11 countries) whereas in 2015 the sole most popular format, Strictly Come Dancing, reached six top spots.

These successful formats often come from the United Kingdom: British formats represent 36% of the adaption offering on the traditional channels studied. These are followed by Dutch and then American formats. Nevertheless, channels are increasingly looking for inspiration in other countries, such as Sweden, Denmark, or Australia. In 2016, Danish formats were particularly popular: their proportion in the offering increased by 164% compared to 2015. The emblematic programmes of this trend are Married at First Sight, Kiss Bang Love and Real Men.

This year again, entertainment was dominated by competition-based formats. In 2016, they represented 44% of the top launches on commercial targets for the channels studied, an increase of 14 points compared to last year. The genre, based mainly on major international hits, showed that it was possible to successfully innovate.

Game shows are now in the majority of top launches among commercial targets, with 14 new programmes broadcast in 8 different territories. Three types of games were showcased this year: panel shows (with celebrities), such as Dara O Briain’s Got 8 Bit in the United Kingdom; challenges such as Ninja Warrior, 7thin the Top 15 in France; quizzes, such as 0,000 Pyramid, a reboot of the 1970’s cult game in the United States.

Many viewers also followed the new dating programmes. The most daring concepts continue to increase audiences, as demonstrated by the success of the adaptation of the Danish format Kiss Bang Love on ProSieben in Germany, or the British format Ex On The Beach: La Revanche des ex on NRJ 12 in France. But there is no shortage of romance: broadcast in Spain on Cuatro, First Dates, an adaptation of the British format, attracted an average of 1.3 million viewers for its 203 episodes, thus becoming the channel’s second best programme.

A market in competition with VOD stakeholders

Formats based on traditional mechanisms continue to dominate rankings but successful programmes offering multi-screen experiences are becoming more common. This year, the programme All Against 1 (DR1 – Denmark) is a perfect example of this. It is ranked as the 8th entertainment programme in Denmark and offers a game that includes the participation of viewers via their smartphones. Other forthcoming programmes are a result of partnerships between traditional and digital TV stakeholders, such as the hit Norwegian talent contest The Stream (Nordic World / Spotify), which will soon be adapted on NBC in the United States. VOD platforms recently moved into the market, for example, at the start of the year, Netflix launched Ultimate Beast Master. New mobile platforms devoted to young people are also focusing on entertainment, such as Go90 and its programme MVP. They offer shorter formats produced in different manners in order to comply with young people’s mobile usage. Snapchat has even announced a television reality show (Second Chance) in a vertical format.

Driven by strong competition, entertainment offers many opportunities involving new technologies and multi-screen usage. Therefore, the genre is more than ever at the heart of current and future trends.