Tennis fans keen to catch all the action from this weekend’s Wimbledon finals are in luck, as today BBC iPlayer has made it even easier for some viewers to restart live BBC programmes, ensuring that even if they’re running late they won’t miss a moment of the drama from centre court. 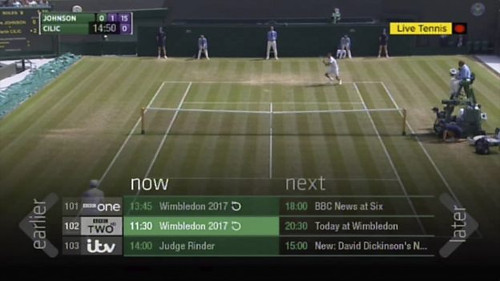 With the push of a single button, viewers with compatible connected set-top-boxes can now watch programmes from the beginning directly from their electronic programme guide (EPG), without having to wait for them to be made available on demand afterwards.

Live restart was pioneered by BBC iPlayer, and has been available for web and mobile browsers and for viewers watching on connected TVs for some time. Already more than half of people watching BBC iPlayer live on TVs use live restart, and almost one in five BBC iPlayer viewers across all platforms use it.

Starting with Freesat, it’s now being made part of an EPG for the first time, bringing the feature to even more people. The BBC hopes to roll this out to other connected TV platforms in the future.

Dan Taylor-Watt, head of BBC iPlayer, says: “Live restart is one of BBC iPlayer’s most popular features, particularly as more and more people are watching live. It’s the first integration of its kind, but we hope to work with more partners in the future to bring this function to as many people as possible.”